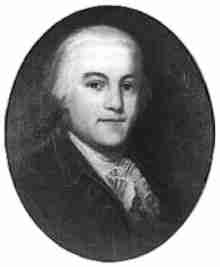 Edward Rutledge (November 23, 1749 – January 23, 1800) was an American politician and youngest signer of the United States Declaration of Independence. He later served as the 39th Governor of South Carolina.

Like his eldest brother John Rutledge, Edward was born in Charleston. He was the youngest of seven children (5 sons and 2 daughters) born to Dr. John Rutledge and Sarah Hext. His father was a physician and immigrant of Scots-Irish descent; his mother was born in South Carolina and was of English descent. Following his brothers John and Hugh he studied law in London at the Inns of Court. In 1772 he was admitted to the English bar (Middle Temple){Citation needed|date=August 2013}, and returned to Charleston to practice. He was married on 1 March 1774 to Henrietta Middleton (17 November 1750 – 22 April 1792), daughter of Henry Middleton. The couple had three children;

Rutledge had a successful law practice with his partner, Charles Cotesworth Pinckney. He became a leading citizen of Charleston, and owned more than 50 slaves.

Along with his brother John, Rutledge represented South Carolina in the Continental Congress. He worked to have African Americans expelled from the Continental Army. Although a firm supporter of colonial rights, he (as a delegate) was instructed initially to oppose Lee’s Resolution of independence; South Carolina’s leaders were unsure that the time was “ripe.” By early July, 1776, he was instructed to vote in favor. Contrary to popular opinion, there is no evidence that he opposed the anti-slavery clause in the Declaration{Citation needed|date=August 2013}. At age 26 he was the youngest to sign the Declaration of Independence.

He returned home in November 1776 to take a seat in the South Carolina Assembly. He served as a captain of artillery in the South Carolina militia, and fought at the Battle of Beaufort in 1779. The next year he was captured by the British in the fall of Charleston, and held prisoner until July 1781.

After his release he returned to the state assembly, where he served until 1796. He was known as an active member and an advocate for the confiscation of Loyalist property. He served in the state senate for two years, then was elected governor in 1798. He had to go to an important meeting in Columbia. While there he had to be sent home because of his gout. He died in Charleston before the end of his term. Some said at the time that he died from apoplexy resulting from hearing the news of George Washington’s death.

Rutledge was a main character in the musical play 1776, in which he sings the song “Molasses to Rum” about slavery and the Triangle Trade. He is depicted as the secondary antagonist in the play (to John Dickinson) in obstructing John Adams, Benjamin Franklin and Thomas Jefferson. Rutledge was portrayed by Clifford David in the original Broadway production, and John Cullum in the 1972 film. 1776 claims that Rutledge led the opposition to an anti-slavery clause in the original draft of the Declaration. Rutledge’s leadership against the clause is fictional. According to Jefferson, the clause was opposed by South Carolina and Georgia, plus unspecified “northern brethren”; that is the limit of known information about opposition to the clause. Rutledge was a delegate from South Carolina, but there is no evidence in the historical record that he played any part—much less that of leader—in the opposition to the clause.

In the 2008 miniseries John Adams, Rutledge was portrayed by Clancy O’Connor.

Actress Goldie Hawn is a direct descendant of Rutledge through her father.