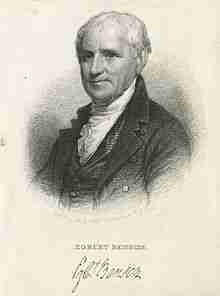 Egbert Benson was born in New York City, the son of Robert Benson (1715–1762) and Catherine (Van Borsum) Benson (1718–1794). He was privately educated then attended King’s College (now Columbia University), graduating in 1765. He read law, was admitted to the bar and moved to Red Hook in Dutchess County. He practiced law both there and in New York City.

When the British occupied New York City in 1776, Benson remained in Dutchess County for several years. The county made him the president of their Committee of Safety and in 1777 sent him to the revolutionary New York State Assembly. When the first state government was organized, Benson was appointed the first New York Attorney General and served until 1788. He was elected to the Assembly annually until 1781 and again in 1788.

New York sent Benson as a delegate to the Continental Congress in 1784. Although he was reappointed in 1785, he did not attend sessions. In 1786, he was named by the Legislature to accompany Alexander Hamilton as a delegate to the Annapolis Convention which issued a call for the U.S. Constitutional Convention held the following year. He returned to the Congress in 1787 and 1788, and in 1788 attended the state convention that ratified the United States Constitution.

Benson was part of the three man commission that decided the location of the St. Croix River in 1798.

Benson returned to the private practice of law in New York City in 1803. He joined other civic leaders to found the New York Historical Society and served as its first president from 1804 to 1816. He is the author of several books, including Vindication of the Captors of Major Andre, defending the three American Patriots who captured the spy Major John Andre, which led to the discovery of the plot to surrender West Point to the British by Benedict Arnold.

In 1812 he was again elected to the U.S. Congress as a Federalist but served only five months before he resigned on August 2, 1813.

Benson married late in life, on May 17, 1820 to Maria Conover (1796–1867). He died in 1833 in Jamaica, Queens and is buried in the Prospect Cemetery there. His death left John Marshall and James Madison as the only surviving Founding Fathers of the United States.