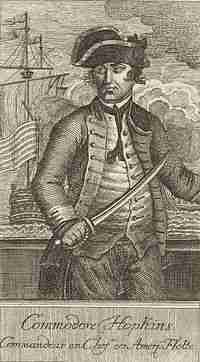 Commodore Esek Hopkins (April 26, 1718 – February 26, 1802) was the only Commander in Chief of the Continental Navy during the American Revolutionary War. He was also an accomplished merchant captain and privateer.

Esek Hopkins was born in Scituate, Rhode Island. Before the Revolutionary War he had sailed to nearly every quarter of the earth, commanded a privateer in the French and Indian War, and served as a deputy to the Rhode Island General Assembly. Appointed a brigadier general to command all military forces of Rhode Island in October 4, 1775, he immediately began to strengthen Rhode Island’s defenses with the help of his deputy, William West. A few months later, December 22, 1775, Hopkins was appointed Commander in Chief of the Continental Navy authorized by the Continental Congress to protect American commerce.

In September 1764, during his time as a privateer and merchant, Hopkins took command of the slave ship Sally, owned by Nicholas Brown and Company. Hopkins had no prior experience in operating a slave trading vessel at the time, and the 15 month voyage would result in disaster with 109 out of 196 slaves dying after being acquired. In late 1765, the Sally arrived at its first trading destination in the West Indies, but the surviving African captives were in such poor health that most sold for very little. Hopkins’ failed command of the Sally contributed to the Brown brothers reconsidering their participation in the active slave trade of Rhode Island in the 18th century.

On January 5, 1776, Congress gave Hopkins his set of orders. “You are instructed with the utmost diligence to proceed with the said fleet to sea and if the winds and weather will possibly admit of it to proceed directly for Chesapeake Bay in Virginia and when nearly arrived there you will send forward a small swift sailing vessel to gain intelligence….If…you find that they are not greatly superior to your own you are immediately to enter the said bay, search out and attack, take or destroy all the naval force of our enemies that you may find there. If you should be so fortunate as to execute this business successfully in Virginia you are then to proceed immediately to the southward and make yourself master of such forces as the enemy may have both in North and South Carolina…Notwithstanding these particular orders, which it is hoped you will be able to execute, if bad winds, or stormy weather, or any other unforeseen accident or disaster disenable you so to do, you are then to follow such courses as your best Judgment shall suggest to you as most useful to the American cause and to distress the Enemy by all means in your power.”

Hopkins took command of eight small merchant ships that had been altered as men of war at Philadelphia. After much deliberation about taking on the overwhelming British forces listed in his orders, Hopkins utilized the last portion of his orders. Hopkins sailed south February 17, 1776 for the first U.S. fleet operation that took the fleet to Nassau in the Bahamas. He felt that it would be much more advantageous to seize a prize for the Continental Army than take a chance of destroying the Continental Navy in its infancy. He knew that the British port in Nassau would be poorly guarded and had friends there who would help his cause. The Battle of Nassau, an assault on the British colony there March 3, 1776 was also the first U.S. amphibious landing. Marines and sailors landed in “a bold stroke, worthy of an older and better trained service,” capturing munitions desperately needed in the War of Independence. The little fleet returned to New London on April 8, 1776, having also made prizes of two British merchantmen and a six-gun schooner, but failing to capture but injuring severely the {HMS|Glasgow|1757|6} on April 6. John Hancock, President of the Continental Congress, wrote Hopkins: “I beg leave to congratulate you on the success of your Expedition. Your account of the spirit and bravery shown by the men affords them [Congress] the greatest satisfaction . . .” Not only did Hopkin’s expedition get needed war supplies for the Continental Army, but it showed the British Navy that they would have to divert their ships from the belligerent colonies to protect non-belligerent areas, thereby leaving fewer British ships to fight on the war front. John Paul Jones was a lieutenant at this time under Hopkins.

Hopkins decision to go to Nassau rather than pursue another part of his orders concerning Chesapeake Bay of Virginia and North and South Carolina, upset southern members of the Continental Congress which added to the political, social, economic, religious, and philosophical differences already occurring between members of the Congress.

What happened next in the ensuing months was politically complex and controversial. The Continental Congress allowed privately owned ships to help in the battle against Britain. There were virtually thousands of these ships which overtook British ships helping the war effort at sea. These privateer ships were allowed to claim any items found on the British ships they conquered as their own. They therefore were able to pay their seamen and officers nearly twice the amount that the Continental Navy could pay their crews since the items captured by Continental ships went for the good of the colonies. Even after the Congress built and outfitted several more ships for Commodore Hopkins to use, he could not find adequate personnel to man the ships. John Adams, Sam Adams, Benjamin Franklin, Richard Henry Lee, Robert Treat Pain and John Paul Jones came to the defense of Hopkins.

Nevertheless, on August 12, 1776, Congress censured Hopkins. Humiliation and an injured reputation followed after the censure. Many sources say it would have been better if Hopkins was relieved of his command after the censure, rather than resume his command with a disgraced reputation and a loss of respect from his officers. Yet shortly after this John Hancock, President of the Continental Congress wrote a resolution to have a schooner remade into a war ship and named the Hopkins, although there are no records that indicate his resolution was fulfilled.

Hopkins’ little fleet was mostly blockaded in Narragansett Bay by the superior British sea power for the rest of Hopkins’ tenure as Commander-in-Chief of the Continental Navy partly due to the fact that he had inadequate manpower to confront the enemy. A disloyal group of Hopkin’s officers finally went directly to the Congress while at the same time leaving their ships without permission. Later it was proven that the allegations the officers took to Congress could not be substantiated. Not in time though, to squelch what was to happen. As time progressed, pressure on the nature of Hopkins’ character and ability became increasingly significant. Even though John Hancock had congratulated Hopkins at the time, Hopkin’s decision to go to Nassau in the Bahamas and the escape of the Glasgow was used by politically charged legislators against him. Even with the impassioned defense of John Adams, the Continental Congress voted on 2 January 1778 to relieve Hopkins of his command permanently. Nevertheless, the first act Hopkins did at the beginning of the war in Nassau, which proved later to be an effective method for the Continental Navy to use against an overwhelming British Navy, was politically used against him. Substantiating this, John Paul Jones, who had been a lieutenant directly under Hopkins, gained great respect while continuing this same type of naval warfare{Citation needed|reason=need to cite that this was all Jones idea and not his civilian policy makers|date=March 2011} against the much larger Royal Navy.

Hopkins was terminated by the Congress on 30 July 1778 for his part in the arrest of Richard Marven and Samuel Shaw, a pair of early whistleblowers. Hopkins is singlehandedly responsible for the resolution of Congress “That it is the duty of all persons in the service of the United States, all well as all other inhabitants thereof to give the earliest information to Congress or any other proper authority of any misconduct, frauds or other misdemeanours committed by any persons in the service of these states, which may come to their knowledge.”

==After the Revolution and legacy==

Hopkins was a founding member of the Society of the Cincinnati. He was highly respected in Rhode Island and continued to serve the Rhode Island General Assembly through 1786, then retired to his farm where he died February 26, 1802. His home, the Esek Hopkins House, is now listed on the National Register of Historic Places.

See USS Hopkins for ships named in his honor.

Hopkins was the brother of Rhode Island governor Stephen Hopkins, a signer of the Declaration of Independence and first Brown chancellor in conjunction with the tenure of president James Manning.

Hopkins married to Desire Burroughs (1724-1794) in November 1741. The marriage produced 9 children, including John Burroughs Hopkins (1742-1796), a participant in the Gaspee Affair, who later became a captain in the Continental Navy and Susannah Hopkins (1756-1850), who married Jonathan Maxcy, a Baptist minister and second president of the formerly Baptist affiliated Brown University which was then known as the College of Rhode Island and Providence Plantations.