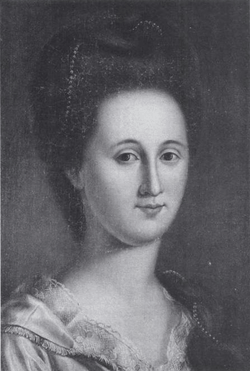 Esther de Berdt Reed (October 22, 1746 – September 18, 1780) was active in the American Revolutionary War as a civic leader for soldiers’ relief, who formed and led the Ladies Association of Philadelphia to provide aid for George Washington’s troops during the war.

Esther de Berdt was born in London, England, into a family descended of Protestant refugees from Ypres, who had fled the “Spanish Fury” led by the Duke of Alba. Her family called her Hette or Hettie and she loved books very much. At the age of twenty-three Esther married Joseph Reed, an American who had studied law in London. Thereafter, she and her widowed mother followed him to Philadelphia in the American colonies. Joseph became a prosperous lawyer and a local political leader, and the couple entertained members of the Continental Congress, including George Washington and John Adams. Reed later served as Washington’s secretary and aide-de-camp.

Though she was English by birth, Esther was exceptionally devoted to the revolutionary cause. During the Revolutionary War, she helped organize a women’s group in Philadelphia which raised more than $7000 in support of the war. At the suggestion of General Washington, the group then used the funds to purchase linen and sew clothing for American troops. De Berdt had wanted to give the men gold or silver coins, something above and beyond what they would normally receive, but Washington feared the money would be used for liquor, and that the men, used to receiving paper money, each volunteer seamstress, whether married or unmarried, sew her name into the clothing she made. More than 2,200 shirts for the soldiers were created from the funds and the labor of these women. For de Berdt’s efforts in support of the American cause, she was recognized as a Daughter of Liberty.

Unfortunately, Reed did not live to see her efforts fully realized. Reed died on September 18, 1780, at the young age of 34. The daughter of Benjamin Franklin, Sarah Franklin Bache, took over Reed’s position and finished the patriotic project. Though she did not see the project finished, Reed’s efforts did not go unacknowledged. She was recognized as a Daughter of Liberty, and women in several colonies, including Maryland, New Jersey, and Virginia, followed her example by starting similar fundraising organizations. Her commitment to the Revolution is especially noteworthy because she was British; she had lived in America only a few years before the war against her homeland began. In writing about her reasons for this unusual action, Esther Reed made it clear that freedom was her motivation, and that women also were capable of publishing political thought.

During an evacuation of Philadelphia she fled with her six children to Flemington, New Jersey. She is buried in the Arch Street Presbyterian Church cemetery in Philadelphia. Her epitaph reads: In memory of Esther, the beloved wife of Joseph Reed President of this State, who departed this life On the 18th of September, A.D. 1780, aged 34 [sic] years. Reader! If the possession of those virtues of the heart Which make life valuable, or those personal endowments which Command esteem and love, may claim respectful and affectionate Remembrance, venerate the ashes here entombed. If to have the cup of temporal blessings dashed In the period and station of life in which temporal blessings May be best enjoyed, demands our sorrow, drop a tear, and Think how slender is that thread on which the joys And hopes of life depend.

Reed contributed to “The Sentiments of an American Woman,” a broadside published in Philadelphia on 10 January 1780, which appealed for women’s war support and declared that women were the equals of men in patriotism. The call to action was successful and the Ladies Association of Philadelphia became the largest women’s organization of the Revolutionary War.