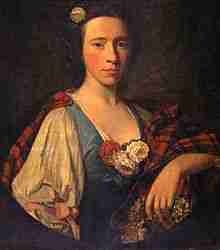 Flora MacDonald (Gaelic: Fionnghal nic Dhòmhnaill) (1722 – 4 March 1790), Jacobite heroine, was the daughter of Ranald MacDonald of Milton on the island of South Uist in the Outer Hebrides of Scotland, and his wife Marion, the daughter of Angus MacDonald.

Her father died when she was a child, and her mother was abducted and married by Hugh MacDonald of Armadale, Skye. She was brought up under the care of the chief of her clan, the MacDonalds of Clanranald her father’s cousin, and was partly educated in Edinburgh. Throughout her life she was a practising Presbyterian.

During the Jacobite Risings, in June 1746, at the age of 24, she was living on the island of Benbecula in the Outer Hebrides when Bonnie Prince Charlie took refuge there after the Battle of Culloden. The prince’s companion, a Captain O’Neill, sought her assistance to help the prince escape capture. The island was controlled by the Hanoverian government using a local militia, but the MacDonalds were secretly sympathetic with the Jacobite cause.

After some hesitation, Flora promised to help the prince escape the island. At a later period she told the Duke of Cumberland, son of George II and commander-in-chief in Scotland, that she acted from charity and would have helped the duke himself were he in defeat and in distress.

The commander of the local militia was her stepfather, Hugh MacDonald. The commander gave her a pass to the mainland for herself, a manservant, an Irish spinning maid, Betty Burke, and a boat’s crew of six men. The prince was disguised as Betty Burke. He had left Benbecula on 27 June.

After a first repulse at Waternish, Skye, the party landed at Kilbride, Skye, within easy access of Monkstadt, the seat of Sir Alexander MacDonald. The prince was hidden in rocks while Flora MacDonald found help for him in the neighbourhood. It was arranged that he be taken to Portree, Skye and from there taken to Glam on the island of Raasay. The talk of the boatmen brought suspicion on Flora MacDonald, and she was arrested and brought to London for aiding the prince’s escape. After a short imprisonment in the Tower of London, she was allowed to live outside of it, under the guard of a “messenger” or gaoler. When the Act of Indemnity was passed in 1747 she was released.

On 6 November 1750, at the age of 28, she married Allan MacDonald of Kingsburgh, a captain in the army and the eldest son of Alexander MacDonald VI. The couple lived at Flodigarry on the Isle of Skye where they subsequently parented five sons and two daughters. Upon the death of Allan MacDonald’s father in 1772, the family moved into the MacDonald family estate at Kingsburgh.

Her bravery and loyalty had gained her general sympathy, increased by her good manners and gentle character. Dr Johnson, who met her in 1773, the year before she moved to America, described her as “a woman of soft features, gentle manners, kind soul and elegant presence.” He also paid the tribute that is engraved on her memorial at Kilmuir:

> “…a name that will be mentioned in history, and if courage and fidelity be virtues, mentioned with honour.””’

In 1774, she and her husband emigrated to North Carolina. During the American War of Independence Captain MacDonald served the British government in the 84th Regiment of Foot (Royal Highland Emigrants). Legend has it that she exhorted the Loyalist force at Cross Creek, North Carolina (present-day Fayetteville) that included her husband, Allan, as it headed off to its eventual defeat at the Battle of Moore’s Creek Bridge in February, 1776.

He was captured after the battle and was held prisoner for two years until a prisoner exchange occurred in 1777. He was then sent to Fort Edward in Windsor, Nova Scotia where he took command of the 84th Regiment of Foot (Royal Highland Emigrants), Second Battalion. After her husband was taken prisoner, Flora remained in hiding while the American Patriots ravaged her family plantation and took all her possessions. When her husband was released from prison during the fall of 1778, she reunited with him at Fort Edward.

In 1779 Flora returned home to Scotland in a merchant ship. During the passage, the ship was attacked by a privateer. She refused to leave the deck during the attack and was wounded in the arm.

Flora resided at the homes of various family members, including Dunvegan, her daughter Anne having married Major General Alexander Macleod. After the war, in 1784, Allan also returned and the family regained possession of the estate in Kingsburgh. Flora MacDonald had a large family of sons, who mostly entered the army or navy, and two daughters.

She died at Kingsburgh on the Isle of Skye in 1790, at the age of 68. She is buried in the Kilmuir Cemetery. There is a statue to her memory in the grounds of Inverness Castle.

The “Flora MacDonald’s Fancy” is a Scottish highland dance choreographed in her honour, supposedly based on a dance she performed for Bonnie Prince Charlie. It is known for its balletic steps and graceful movements.

* Inglis Fletcher, The Scotswoman (1954) – a novel on Flora MacDonald’s later life in North Carolina, during the American war of Independence.
* Highlander: The Series – in the 3rd-season episode, “Take Back the Night”, Ceirdwyn, an Immortal, is living under the name of “Flora MacDonald” when Bonnie Prince Charlie and his party stop there on their way to the coast, and the boat to take him from Scotland.
* The Outlander Series – the 6th book of Diana Gabaldon’s Outlander series, “A Breath of Snow and Ashes”, features an account of Flora MacDonald’s arrival in the American colonies.