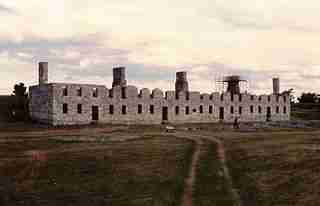 Crown Point, was a British fort built by the combined efforts of both British and Provincial troops (from New York and the New England Colonies) in North America in 1759 at narrows on Lake Champlain on the border between modern New York State and Vermont. Erected to secure the region against the French, the Fort is located near the town of Crown Point, New York and was the largest earthen fortress built in the United States. The site is now administered as Crown Point State Historic Site.

The French second built a fortress at Crown Point in the 1730s with {convert|12|ft|m|adj=on} thick limestone walls named Fort St. Frederic. British forces targeted it twice during the French and Indian War before the French destroyed it in the summer of 1759.

The Crown Point fort was constructed by the British army under the command of Sir Jeffery Amherst following the capture of Carillon, a French fort to the south (which he renamed Ticonderoga), and the destruction of Fort St. Frédéric. Amherst used the construction of the fort as a means of keeping his men working through the winter of 1759 after pushing the French into modern Canada.

The Fort was never directly assaulted. Mostly built after the threat of French invasion had ended, it was used largely for staging rather than as a position in its own right.

On April 21, 1773, a chimney fire broke out in the Soldier’s Barracks. It quickly spread, burning for days. British military engineer John Montressor described the fort (post fire) with the following words: “the Conflagration of the late Fort has rendered it an amazing useless mass of Earth only”. Montressor proposed expanding and improving one of the outworks rather than attempting to repair the main fort.{cn|reason=need a reference for the magazine explosion and the damage to the timber lined casemates|date=August 2013}

After the French and Indian War the British left only a skeletal force at the Fort, which yielded easily to Capt. Seth Warner and 100 Green Mountain Boys, an American militia, on May 12, 1775 in the battle of Crown Point at the start of the American Revolution. The 111 cannons captured from the British at Crown Point, so early in the War for American Independence, soon proved valuable in driving the British out of Boston Harbor. The Fort was used as a staging ground by Benedict Arnold during the Revolution for his navy on Lake Champlain. After the destruction of that navy in 1776 during the Battle of Valcour Island, the Fort was abandoned to the British in 1777. It was abandoned for good in 1780.

The large earthen walls of the Fort are still visible today. A massive, accidental fire in April 1773 entirely destroyed the log and earth fortress, leaving the empty stone ruins of two barracks buildings standing. These ruins still stand and are being carefully preserved.

The Fort was declared a National Historic Landmark in 1968.