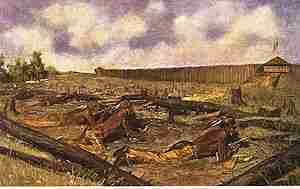 Fort Pontchartrain du Détroit or Fort Detroit was a fort established by the French officer Antoine de la Mothe Cadillac in 1701. The location of the former fort is now in the city of Detroit in the U.S. state of Michigan, an area bounded by Larned Street, Griswold Street, and the Civic Center.

Fort Detroit began on the Detroit River built to try to keep the British from moving west of New England and to monopolize the fur trade in North America. Before he built Fort Detroit, Cadillac was commandant of Fort de Buade, another French outpost in North America. Fort de Buade was abandoned in 1697 due to conflicts with religious leaders over the trading of alcohol to the Native Americans. Cadillac then persuaded his superiors to let him build a new settlement. He reached the Detroit River on July 23, 1701.

When he landed on the site he held a celebration to formally take control of the area. In honor of Louis Phélypeaux, Comte de Pontchartrain (or his son, Jérôme), Minister of Marine to Louis XIV he named the new settlement Fort Ponchartrain du Detroit. The storehouse and the stockade were started immediately, but the first building completed was Ste. Anne’s Church. The stockade came next and was made of logs rising about 12 feet into the sky with towers in each corner.

The 69 major conflict of Fort Detroit occurred in March 1706 while Cadillac was away. The Ottawas heard a rumor about a Huron tribe ambush. The Ottawas then attacked and killed several members of the Miami tribe. The Miamis then went inside the fort and were defended by the soldiers. About 30 Ottawas were killed when they attacked the fort. After the battle the Miamies attacked an Ottawa village. A priest and a French sergeant outside the walls were killed.

The fort was commanded by Étienne de Veniard, Sieur de Bourgmont. Bourgmont was criticized for his handling of the incident. When Cadillac returned, Bourgmont and some soldiers from the fort deserted. The French captured one of the deserters who testified that the deserting party had shot and killed one of its own and cannibalized him.

In 1712, as Cadillac was removed under a cloud of greed and replaced by Dubuisson. The Fox heard of this and planned an attack on the fort (after some of Cadillac’s supporters had left). They besieged the fort in late April, with a force of about 1,000 Fox, Sac and Mascoutens. The Ottawas and the Hurons were out on a raid and so could not help the French. Jean Baptiste Bissot, Sieur de Vincennes, commander of the French outpost at Kekionga (now Fort Wayne, Indiana) and seven fur traders came to the fort, sneaking through Fox lines. Dubuisson sent messengers, and the Ottawa and Huron Indians came to the fort’s aid. When the warriors came, the Fox were then caught between the French and their Allies and were themselves besieged until the end of May. They fled to what is now Windmill Point, where the French and Huron Indians pursued them. After four days siege there, the Fox surrendered so their families would be spared. The French agreed, but after the Fox were disarmed, they attacked and killed all the Fox. This event is known in the Grosse Pointe area as the Fox Indian Massacre. This siege of Fort Detroit was the opening incident in the Fox Wars.

After a few years the British and the French conflict over North America came to a head in the French and Indian War. Detroit was far removed from the main areas of conflict and did not see combat. On November 29, 1760, Fort Detroit was turned over to the British Army’s Rogers’ Rangers, two months after the capitulation of the French at Montreal. British rule differed in several major ways from French rule. The British required greater taxes and confiscated weapons from “unfriendly” settlers while refusing to sell ammunition to them or to the natives. This limited their ability to trap and hunt, as well as rendering them less of a threat. The British did not emphasize maintaining good relationships with the Native Americans. After the French left the conflict, Chief Pontiac of the Ottawas rallied several tribes in Pontiac’s Rebellion and attempted to capture Detroit from the British on May 7, 1763. They failed to capture the fort, as the British were forewarned of the attack, but did lay siege to it (see the Siege of Fort Detroit). The British force in the fort, commanded by Henry Gladwin, consisted of 130 soldiers with two 6-pound cannons, one 3-pound cannon, and three mortars. As well, the 6-gun schooner Huron was anchored in the Detroit River. Two months into the siege, on July 29, 1763, the British brought a large relief force into the area. Skirmishing in the area, including the Battle of Bloody Run, continued until mid-November when the Indians dispersed.

During the American Revolutionary War, Detroit was far to the west of the main area of action. The fort’s main contribution was to arm American Indian raiding parties who attacked American settlements to the southeast. American revolutionaries, particularly George Rogers Clark, hoped to mount an expedition to Detroit in order to neutralize these operations, but could not raise enough men to make the attempt. Clark did manage to capture Henry Hamilton, the Lieutenant-Governor of Canada and senior officer at Fort Detroit. While Hamilton was a prisoner of war, in late 1778 Captain Richard B. Lernoult began construction on a new fortification a few hundred yards to the south of the original fortification. It was named Fort Lernoult on October 3, 1779.

Under the terms of the Treaty of Greenville in 1795, the signatory Indian tribes ceded several blocks of land to the United States, which were beyond the Greenville Treaty Line and within the Indian’s territory. Article 3, Item 12 contains, “The post of Detroit, and all the land to the north, the west and the south of it, of which the Indian title has been extinguished by gifts or grants to the French or English governments: and so much more land to be annexed to the district of Detroit, as shall be comprehended between the river Rosine, on the south, lake St. Clair on the north, and a line, the general course whereof shall be six miles distant from the west end of lake Erie and Detroit river.” On July 11, 1796, under terms negotiated in the Jay Treaty, Fort Detroit, Fort Lernoult and the surrounding settlement was surrendered by the British to the Americans, 13 years after the Treaty of Paris ended the war and the area was ceded to the United States.

During the course of the War of 1812, both the Americans and British launched invasions of each other’s territory, all of which were unsuccessful or gained only temporary success. At the end of the war, the British held parts of Maine and some outposts in the sparsely populated West while the Americans held Canadian territory near Detroit, but these occupied territories were restored at the end of the war.