Fort Herkimer was a fort located on the southern side of the Mohawk River, opposite West Canada Creek, in central New York, United States.

The fort was first built in 1740, around the homestead of the Herscheimer (Herkimer) family. In 1757 during the Seven Years War, young Captain Nicholas Herkimer (later to be a heroic general in the Revolutionary War) had his first military command here when the French attacked German Flatts in 1757 and 1758. It has originally known as Fort Kaouri (Fort Bear).

During the American Revolutionary War, the fort was rebuilt as a defensive stone stockade around the Fort Herkimer Church. A joint British and Onondaga force attacked German Flatts and the forts on each side of the river in 1778.

Both the old and new forts were destroyed during expansion of the Erie Canal in 1840, as their stones were used for its construction. The Fort Herkimer Church still stands today. The church belongs to the regional Montgomery Classis of the Reformed Church in America.

The former site of Fort Herkimer is located in the current town of German Flatts, on the south side of the Mohawk River in Herkimer County, New York. Fort Herkimer is sometimes confused with nearby Fort Dayton, around which the Village of Herkimer was built. 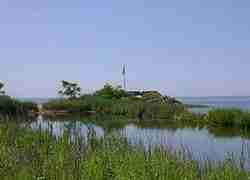