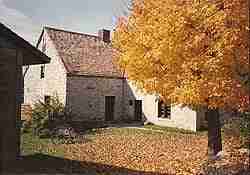 Fort Klock, a fortified stone homestead in the Mohawk River Valley of New York State, was built c.1750 by Johannes Klock. On October 19, 1780, the Battle of Klock’s Field was fought just to west-northwest of the fort. The fort is located at 7203 Route 5 roughly two miles (3 km) east of the Village of St. Johnsville, New York.

There were two distinct places referred to as Fort Klock during the Revolutionary War: Johannes’ house and the home of his brother, Conradt Klock, located in Reimensnyders Bush or Glen’s Purchase to the north of Little Falls, New York. The Klock Forts were, but two of the plethora of fortifications in the central and upper Mohawk Valley, built to resist raids from the British and their allies. The thick stone walls of Fort Klock are pierced with firing ports, allowing the occupiers to fire rifles at attackers. At times, a small garrison of soldiers would live in the houses.

Fort Klock is part of a {convert|30|acre|m2|sing=on} complex that includes the historic homestead, a renovated Colonial Dutch Barn, blacksmith shop, and 19th century schoolhouse. The site is maintained by Fort Klock Historic Restoration and is open seasonally as a living museum.

Fort Klock was declared a National Historic Landmark in 1972.