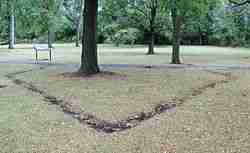 Fort Laurens was an American Revolutionary War fort in what is now the U.S. state of Ohio.

The fort was built by General Lachlan McIntosh, in 1778, on the west bank of the Tuscarawas River, now in Tuscarawas County near the town of Bolivar. The fort was intended to be a staging point for an attack against the British garrison at Detroit. However, the conditions at the fort were harsh during the winter, and McIntosh removed most of the American forces to Fort Pitt, leaving only about 150 men (from the 8th Pennsylvania Regiment and 13th Virginia Regiment) under the command of Colonel John Gibson. Fort Laurens was the only fort built in the Ohio Country during the Revolutionary War.

The British learned of the miserable conditions at the fort, and on February 22, 1779, Captain Henry Bird of the 8th Regiment of Foot with a handful of British soldiers and a couple hundred Wyandot, Mingo, Munsee, and Delaware warriors laid siege to the fort. The siege continued until mid-March, and the men inside the fort reportedly were reduced to making a stew of boiled moccasins The British forces were also weakened by the long siege and lifted the siege on March 20, 1779. Relief forces from Fort Pitt arrived three days later, leaving a force of 106 men behind under the command of Major Frederick Vernon. Colonel Daniel Brodhead had replaced McIntosh as commander at Fort Pitt and felt the fort was inadequate for mounting an attack on Fort Detroit. The fort was abandoned on August 2, 1779.

It was named after Henry Laurens, a president of the Continental Congress from South Carolina. The fort was used as a reference point in defining the boundary line in Treaty of Greenville, although the text of the treaty misspells the name as “Fort Lawrence”.

Funds are currently being raised to build a replica of the fort on the original site.

The Ohio Historical Society operates a small museum at the site with exhibits about the frontier soldier, a video about the fort’s history and archaeological artifacts from the fort’s excavation. The museum is located in a large park that is the used for military reenactments. A crypt in the museum wall contains remains of soldiers who died defending the fort. The site is closed in the winter.

In 1970, the fort site was listed on the National Register of Historic Places.