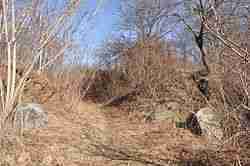 Fort Lee is a historic American Revolutionary War fort in Salem, Massachusetts. The site, located at a high point next to Fort Avenue on Salem Neck, is a relatively rare fortification from that period whose remains are relatively unaltered. Although there is some documentary evidence that the Neck was fortified as early as the 17th century, the earthworks built in 1776 are the first clear evidence of the site’s military use. The site, of which only overgrown earthworks survive, was repaired at the time of the War of 1812 and the American Civil War, but was not substantially modified in those times, or overbuilt with more modern fortifications.

The property was federalized in 1867, and transferred to the City of Salem in 1922. The site was briefly rehabilitated at the time of the United States bicentennial in 1976, with trails and interpretive signs, but these were later removed, and the site has again become overgrown. The fort site was listed on the National Register of Historic Places in 1994.