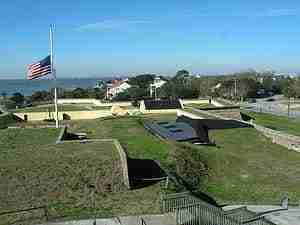 Fort Moultrie is the only area of the National Park System where the entire 171-year history of American seacoast defense (1776–1947) can be traced.

South Carolina patriots began to build a fort to guard Charleston, South Carolina, harbor in 1776. British Admiral Sir Peter Parker with nine British warships attacked the fort—still unnamed and incomplete—on June 28, 1776, near the beginning of the American Revolutionary War. The soft palmetto logs did not crack under bombardment but rather absorbed the shot; cannonballs reportedly even bounced off the walls of the structure. William Moultrie, commander of the 2nd South Carolina Regiment, and his four hundred men fought a day-long battle that ended with the heavily damaged British ships being driven from the area. This victory galvanized the Patriots’ cause for independence. The fort hence took its name Fort Moultrie in his honor. Charleston locals celebrate “Carolina Day” to commemorate the bravery of the defenders of the fort.

During this battle, the Moultrie flew a flag of his own design, authorized by the colonial government. It was later called the Moultrie flag or Liberty flag and became iconic to the Revolution in the South.

The British eventually captured Fort Moultrie as part of the Siege of Charleston in spring 1780. Nevertheless, the colonists won the war, and British troops departed in 1782, at which time the flag was presented in Charleston, by General Nathanael Greene, commander of the southern Regulars.

Great Britain and France began another war in 1793, heightening tensions. The United States of America thence embarked on a systematic fortification of important harbors. Atop the decayed original Fort Moultrie, the Army completed a new fort in 1798; the Army also built nineteen other new forts along the Atlantic coast. The Antigua–Charleston hurricane destroyed Fort Moultrie in 1804, and a brick fort, the third and last such structure, replaced it in 1809. It had five hundred men in the garrison.

Fort Moultrie changed little over the next five decades. The Army altered the parapet and modernized the armament, but defense of Charleston centered increasingly around newly created Fort Sumter. By the time of the American Civil War, Fort Moultrie, Fort Sumter, Fort Johnson, and Castle Pinckney surrounded and defended Charleston.

The Army detained Seminole Indian fighter Osceola and some fellow Seminole prisoners at Fort Moultrie late 1837. Osceola died of malaria in January 1838; the Army buried his corpse at Fort Moultrie and thereafter maintained his grave.

In the months leading up to the Civil War John L. Gardner was in command at Fort Moultrie. With secession growing more imminent Gardner had made several requests to Secretary of War John B. Floyd for more troops to garrison and defend the undermanned fortress. Each time his requests were ignored as the soon to be traitor Floyd was planning to hand the forts in Charleston Harbor over to the secessionists. South Carolina seceded from the Union on December 20, 1860. Unlike their counterparts at the other forts, defenders of Fort Moultrie chose not to surrender to the South Carolina forces. On December 26, 1860, Union Major Robert Anderson moved his garrison at Fort Moultrie to the stronger Fort Sumter. On February 8, 1861, South Carolina joined other seceded Deep Southern states to form the Confederate States of America. In April 1861, Confederate troops shelled Fort Sumter into submission and the American Civil War began.

The Army modernized Fort Moultrie in the 1870s with huge rifled cannon and deep concrete bunkers. Further modernization in the 1880s turned all of Sullivan’s Island surrounding the old fort into a military complex.

The fort evolved with the times through and beyond World War II. On August 15, 1947, the Army lowered Fort Moultrie’s flag for the last time and ended 171 years of service. After the war, seacoast defense of the United States ceased to be a viable strategy.

The Department of Defense in 1960 turned Fort Moultrie to National Park Service. NPS manages the historic fort as a unit of Fort Sumter National Monument. NPS constructed the fort as a tour backward in time through its defenses from World War II to the original palmetto log fort constructed by William Moultrie.

Moultrie is honored with his statue in The Battery section of downtown Charleston.