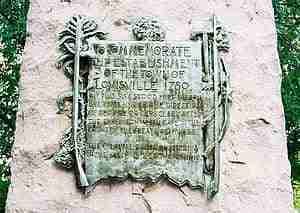 Fort Nelson, built in 1781 by Richard Chenoweth, was the second on-shore fort on the Ohio River in the area of what is now downtown Louisville, Kentucky. Fort-on-Shore, the downriver and first on-shore fort, had proved to be insufficient barely three years after it was established. In response to continuing attacks from Native Americans and the threat of British attacks during the Revolutionary War, Fort Nelson was constructed between what is currently Main Street and the river, with its main gate near Seventh Street. It was named after Thomas Nelson, Jr., then the governor of Virginia. (Kentucky was part of Virginia at the time.)