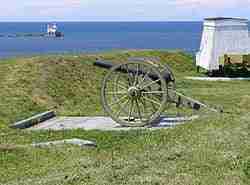 Fort Ontario is a historic fort situated by the City of Oswego, in Oswego County, New York in the United States of America. It is owned by the state of New York and operated as a museum known as Fort Ontario State Historic Site.

Fort Ontario is located on the east side of the Oswego River on high ground overlooking Lake Ontario.

Fort Ontario was one of several forts erected by the British to protect the area around the east end of Lake Ontario. The original Fort Ontario was erected in 1755, during the French and Indian War in order to bolster defenses already in place at Fort Oswego on the opposite side of the river. At that time its name was the “Fort of the Six Nations,” but the fort was destroyed by French forces and rebuilt by British forces in 1759.

At the conclusion of Pontiac’s War, Chief Pontiac urged moderation and agreed to travel to New York, where he made a formal treaty with William Johnson at Fort Ontario on July 25, 1766.

During the American Revolutionary War, a detachment from the 3rd New York Regiment destroyed the fort in July, 1778, after the British abandoned it. The British returned and rebuilt the fort in 1782. There was an aborted attack on the fort by Colonel Marinus Willet in 1783. The British held the fort after the war was over until 1796 after the signing of Jay’s Treaty.

The fort was attacked and destroyed by British forces during the War of 1812 in the year 1814. After a period of disuse, new construction was undertaken in part due to tensions with Great Britain as well as to check smuggling activities between Canada and the United States.

During the American Civil War the new construction began at the fort due to fear of British help from Canada to the South. Although the fort remained a military base, the fort itself fell into ruin, since funds were used to create more modern quarters outside the fort.

The 2nd Brigade of the U.S. 1st Infantry Division called Fort Ontario home until the brigade was inactivated on June 1, 1940.

The restored fort is open to the public as a state historic site. It was listed on the National Register of Historic Places in 1970. In 2010, Fort Ontario was one of the state-funded historical sites named by Governor David Paterson as being potentially unfunded due to the budget crisis faced by New York State. In response, many of the citizens of Oswego and students of the State University of New York at Oswego have joined together in support of the historical site.

Fort Ontario was built with two other forts in the period, Fort George and Fort Oswego.