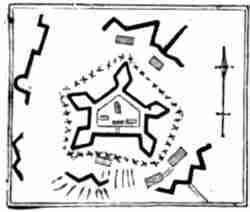 Fort Washington was a fortified position near the north end of Manhattan Island (now part of New York City) and was located at the highest point on the island. The Fort Washington Site is listed on the U.S. National Register of Historic Places.

During George Washington’s defense of New York, during the American Revolution, Fort Washington and Fort Lee (on the New Jersey side of the Hudson River) were created both to prevent the British from going up river and to provide a secure escape route. General Washington realized he would have to defend New York but did not think he could hold it against the British.

Fort Washington was held by American forces under the command of Colonel Robert Magaw, who refused to surrender the fort to the British. He informed the British that he would fight to the last extremity.

In the Battle of Fort Washington, British General William Howe ordered the Hessian soldiers under Lieutenant General Wilhelm von Knyphausen, and other British soldiers, totaling around 8,000 men, to capture the fort from the Patriots. They did so on November 16, 1776, taking 2,818 prisoners and a large store of supplies. The British renamed it Fort Knyphausen.

The English had been materially assisted by one of Magaw’s officers, William Demont, who on November 2 had deserted and furnished Howe with detailed plans of the American works. The American losses were 53 killed and 96 wounded in addition to the rest of the garrison taken prisoner. The British and Hessian troops suffered 132 killed and 374 wounded. 2838 American troops were taken prisoner and marched through the streets of New York to the jeering and mockery of the pro-British populace. Most of the prisoners were interred in British ships in New York harbor, where they were deliberately starved, or died of disease and cold in the bitter winter. At the exchange a year later, only 800 had survived.

At this battle was Margaret Corbin of Virginia, who is recognized as the first female soldier to fight in the American Army. Married to John Corbin of the First Company of the Pennsylvania Artillery, Margaret cleaned, loaded and fired her husband’s cannon when he was killed during the assault on Fort Washington. Although severely injured, Margaret survived the battle but never fully recovered from her wounds, leaving her unable to use her left arm. She is at least one of the candidates as the woman, or women, who inspired the legend of Molly Pitcher.

The modern day location of Fort Washington is marked by Bennett Park on Fort Washington Ave. between West 183rd and West 185th Sts. in the Hudson Heights neighborhood of the Washington Heights section of New York City. The locations of the fort’s walls are marked in the park by stones, along with an inscription. Nearby is a tablet indicating that the schist outcropping that is the highest natural point on Manhattan Island, one of the reasons for the fort’s location.

The park is a few blocks north of the George Washington Bridge. Along the banks of the Hudson River below is Fort Washington Park and the small point of land alternately called Jeffrey’s Hook or Fort Washington Point, which is the site of the Little Red Lighthouse. 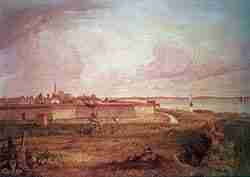 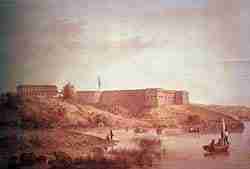