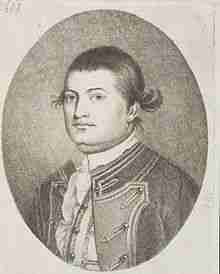 Lieutenant-General Francis Grose (c. 1758 – 8 May 1814) was a soldier and Lieutenant Governor of New South Wales.

Grose was born in Greenland, Middlesex, England around 1758. He was the eldest son of Francis Grose (the well-known English antiquary) and Catherine Jordan. Grose received a commission as an ensign in 1775, in the 52nd Foot and was promoted to lieutenant later that year. Grose served during the American Revolutionary War, where he was twice wounded (at the assaults on Fort Montgomery and Monmouth Court House). Returning to England in 1779 as captain of the 85th Regiment of Foot, he acted as recruiting officer. He attained the rank of major in 1783, in the 96th Foot and in November 1789 was placed in command of the New South Wales Corps and appointed lieutenant-governor of New South Wales.

Grose did not leave England until late in 1791, arriving in Sydney on 14 February 1792. Grose became colonial administrator when Governor Arthur Phillip, whose health had been poor for some time (probably due to poor diet), received permission to depart. The European population of New South Wales when Grose took over was 4,221, of whom 3,099 were convicts.

Phillip had realized that unless there was some control over the sale of alcoholic spirits, great evils would follow, but Grose made no efforts in this direction and great abuses such as the payment of wages in spirits became common. The custom of officers trading in spirits was almost universal and in the interregnum before the arrival of Captain Hunter, the colony was rife with drunkenness, gambling, licentiousness and crime.

How far Grose was responsible for this state of affairs it is now impossible to say. There is, however, no reason to doubt the statements of the chaplain, the Rev. Richard Johnson, that he could get no support from the lieutenant-governor and no assistance in building a church. On the other hand the charges against Grose of making indiscriminate grants of land to his friends and fellow officers appear to be without foundation, as the grants made were in accordance with his instructions and to those officers who requested them.

In spite of the low state of morality and the drinking habits of the people, the position of the colony had improved very much when Grose left for England on 17 December 1794. However, most of the credit for this cannot be given to Grose. His substitution of military for civil power was not for the good of the state and he showed no foresight or real strength in his government.

In all probability the improvement was simply the result of better farming methods, for much of which credit may be given to the two chaplains, Johnson and Samuel Marsden. Grose did, however, increase the rations and improve the housing conditions of his troops.