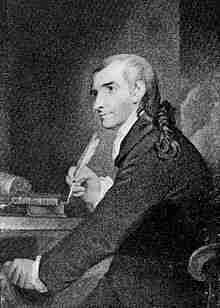 Francis Hopkinson (September 21, 1737 – May 9, 1791), an American author, was one of the signers of the Declaration of Independence as a delegate from New Jersey. He later served as a federal judge in Pennsylvania. He played a key role in the design of the first American flag.

Francis Hopkinson was born at Philadelphia in 1737, the son of Thomas Hopkinson and Mary Johnson. He became a member of the first class at the College of Philadelphia (now the University of Pennsylvania) in 1751 and graduated in 1757, receiving his masters degree in 1760, and a doctor in law (honorary) in 1790. He was secretary to a Provincial Council of Pennsylvania Indian commission in 1761 that made a treaty with the Delaware and several Iroquois tribes. In 1763, he was appointed customs collector for Salem, New Jersey. Hopkinson spent from May 1766 to August 1767 in England in hopes of becoming commissioner of customs for North America. Although unsuccessful, he spent time with the future Prime Minister Lord North and his half-brother, the Bishop of Worcester Brownlow North, and painter Benjamin West. Hi After his return, Francis Hopkinson operated a dry goods business in Philadelphia and married Ann Borden on September 1, 1768. They would have five children. Hopkinson obtained a public appointment as a customs collector for New Castle, Delaware on May 1, 1772. He moved to Bordentown, New Jersey in 1774, became a member of the New Jersey Provincial Council, and was admitted to the New Jersey bar on May 8, 1775. He resigned his crown-appointed positions in 1776 and, on June 22, went on to represent New Jersey in the Second Continental Congress where he signed the Declaration of Independence. He departed the Congress on November 30, 1776 to serve on the Navy Board at Philadelphia. As part of the fledgling nation’s government, he was treasurer of the Continental Loan Office in 1778; appointed judge of the Admiralty Court of Pennsylvania in 1779 and reappointed in 1780 and 1787; and helped ratify the Constitution during the constitutional convention in 1787. On September 24, 1789, he was nominated by President George Washington to the newly created position of judge of the United States District Court for the District of Pennsylvania. He was confirmed by the United States Senate, and received his commission, on September 26, 1789.

Only a few years into his service as a federal judge, Hopkinson died in Philadelphia at the age of 53 from a sudden epileptic seizure. He was buried in Christ Church Burial Ground in Philadelphia. He was the father of Joseph Hopkinson, who was a member of the United States House of Representatives and also became a federal judge. Hopkinson was the designer of the American Flag. He did not get his due in life. At one point, he asked only for a bottle of wine for his efforts, which he never received. So every year on his birthday, the workers at Christ Church take a bottle of wine to his grave-site and share it to remember his contribution.

Hopkinson was an amateur author and songwriter at a time when Philadelphia and the colonies were not well known for the arts. He wrote popular airs and political satires (jeux d’esprit) in the form of poems and pamphlets. Some were widely circulated, and powerfully assisted in arousing and fostering the spirit of political independence that issued in the American Revolution.

His principal writings are A Pretty Story . . . (1774), a satire about King George, The Prophecy (1776), and The Political Catechism (1777). Other notable essays are “Typographical Method of conducting a Quarrel”, “Essay on White Washing”, and “Modern Learning”. Many of his writings can be found in Miscellaneous Essays and Occasional Writings, published at Philadelphia in three volumes in 1792 (see Bibliography).

Hopkinson was a reputed amateur musician. He began to play the harpsichord at age seventeen and, during the 1750s, hand-copied arias, songs, and instrumental pieces by many European composers. He is credited as being the first American born composer to commit a composition to paper with his 1759 composition “My Days Have Been So Wondrous Free.” By the 1760s he was good enough on the harpsichord to play with professional musicians in concerts. Some of his more notable songs include “The Treaty”, “The Battle of the Kegs”, and “The New Roof, a song for Federal Mechanics”. He also played organ at Philadelphia’s Christ Church and composed or edited a number of hymns and psalms including: “A Collection of Psalm Tunes with a few Anthems and Hymns Some of them Entirely New, for the Use of the United Churches of Christ Church and St. Peter’s Church in Philadelphia” (1763), “A psalm of thanksgiving, Adapted to the Solemnity of Easter: To be performed on Sunday, the 30th of March, 1766, at Christ Church, Philadelphia” (1766), and “The Psalms of David, with the Ten Commandments, Creed, Lord’s Prayer, &c. in Metre” (1767). In the 1780s, Hopkinson modified a glass harmonica to be played with a keyboard and invented the Bellarmonic, an instrument that utilized the tones of metal balls. In 1788 he published a collection of 8 songs dedicated to his friend George Washington and his daughter called “Seven Songs for the Harpsichord” and voice.

At his alma mater, University of Pennsylvania, one of the buildings in the Fisher-Hassenfeld College House is named after him.