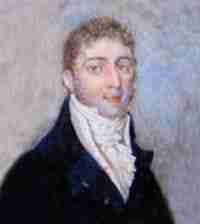 Following his father’s death on 10 October 1759, the family moved on 15 April 1760 to Richmond. In 1762, Francis lodged at Hargreaves in St Martin’s Lane, London. On 17 April 1764, he lodged with Mrs Bathurst, Charterhouse Square and attended the public school of St Bartholomew. In 1770, he went to Mrs Betesworth’s Academy in Kingston, near Portsmouth, Hampshire, leaving in 1772 to join Mr Lockee’s Military Academy, Little Chelsea, London, and later to Colonel Gallatin’s School of Equitation for 7 months.

On 15 December 1773, he was commissioned as Ensign in the 14th Regiment of Foot. On 28 March 1774, he joined his first regiment, moving to quarters in Dover on 13 May 1774. In March 1775, he left for America, where, on 25 August 1775, he was appointed Lieutenant in the 14th Regiment of Foot. By 28 November 1778, he had returned to St George’s, Hanover Square, London, where he married Anne Breynton ({circa} 1756 – 15 August 1829), the daughter of the famous minister in Nova Scotia, Rev Dr John Breynton ({circa} 1719–1799). In 1790, he bought Elmhurst Hall and various other properties in Staffordshire, while still maintaining a house in London. In 1794 he raised the Staffordshire Yeomanry Cavalry and became its Major and subsequently Colonel. In 1797, he tried to sell off his Staffordshire estates. The following year 1798 he raised the Staffordshire Yeomanry Infantry. By 1800 he had moved to Lichfield and in 1803 raised the 2nd Staffordshire Militia, eventually becoming its Lieutenant-Colonel.

In 1806, he finally disposed of his Staffordshire properties, pulling down the derelict Elmhurst Hall. He moved back to London full-time, and took an oath as a Commissioner of Public Accounts, based at Somerset House in the Strand. Around this time he became a man of letters, addressing the foremost politicians of the time, while also writing for a magazine — The Aegis. The next year, he attempted to be elected as MP for Westminster in the United Kingdom general election, 1807. On Friday 8 May 1807, he attended a meeting at Covent Garden, London where he was introduced to the meeting, by Col. Robinson who at that time commanded London Recruiting District, and the Pimlico battalion of the Queen’s Loyal Volunteers from about 1803. His election was unsuccessful and he returned to his literary pursuits.

He died at his home at 22 Portman Street, London on 23 August 1818 and was buried in or by the western wall of the St Marylebone burial ground on the south side of Paddington Street, London — near to his father-in-law, Rev Dr John Breynton.

Many of his sons went on to play significant roles in the British Armed Forces.

1794 “Letters on the subject of the arm’d Yeomanry, addressed to the … Earl Gower Sutherland, etc.” by Francis Perceval Eliot, second edition published Stafford 1794.

1797 “Six letters, etc.” by Francis Perceval Eliot — another edition of “Letters on the subject of the arm’d Yeomanry, addressed to the … Earl of Gower Sutherland, etc.” — published London 1797 British Library Shelfmark: 8827.f.30

1811 “Observations On The Fallacy Of The Supposed Depreciation Of The Paper Currency Of The Kingdom With Reasons For Dissenting From The Report Of The Bullion Committee” by Francis Perceval Eliot Printed for J.J. Stockdale, London 1811. 171 pages, 24 cm British Library Shelfmark: 1028.e.3(4) and 1028.e.5.(1)

1811 “A Supplement To Observations On The Fallacy Of The Supposed Depreciation Of The Paper Currency Of The Kingdom, &c.” Printed for J.J. Stockdale, London 1811 28 pages, 21 cm

1814 “A series of letters on the Political and financial State of the nation at the commencement of 1814” by Falkland (i.e. Francis Perceval Eliot) — published 1814. British Library Shelfmark: P.P.3557.w

1814 “Letters on the Political and financial situation of the country in 1814; addressed to the Earl of Liverpool” by Francis Perceval Eliot — published 1814 British Library Shelfmark: P.P.3557.w

1815 “Three letters on the financial and political situation of the country in the year 1815 … addressed to the Earl of Liverpool” by Francis Perceval Eliot — published 1815 British Library Shelfmark: P.P.3557.w. These letters proposed a system of measures based on a single weight measure, similar to the metric system used in France at the time