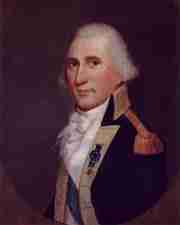 Frederick Frelinghuysen (April 13, 1753{spaced ndash}April 13, 1804) was an American lawyer, soldier, and senator from New Jersey. A graduate of the College of New Jersey (now Princeton University), Frederick went on to become an officer during the American Revolutionary War. In addition, he served as a delegate to the Continental Congress. He was a United States Senator from New Jersey from 1793 until 1796, and served as the United States Attorney for the District of New Jersey in 1801.

He was born near Somerville in the Province of New Jersey to John Frelinghuysen (1727–1754) of Flatbush, Brooklyn and Dinah Van Berg (1725–1807) of Amsterdam. His father, John, was the son of the immigrant minister Theodorus Jacobus Frelinghuysen, the progenitor of the Frelinghuysen family in New Jersey.

He graduated from the College of New Jersey (now Princeton University) in 1770, then he studied law and was admitted to the bar in 1774 and practiced law in Somerset County, New Jersey.

With the coming of the American Revolution, he became a member of the provincial congress of New Jersey from 1775 to 1776. In the War of Independence he served in the New Jersey militia as an artillery captain, seeing action at Trenton and Monmouth. In 1779 he served as a delegate to the Second Continental Congress. He served as a clerk to the Court of Common Pleas of Somerset County, New Jersey from 1781 to 1789. He also served in the New Jersey General Assembly in 1784 and again from 1800 to 1804.

Frederick died in Millstone, New Jersey on April 13, 1804, his 51st birthday, and was buried at the Weston Burying Ground on the border of Manville, New Jersey and Bound Brook, New Jersey. His tombstone reads as follows: Entombed beneath this stone lies the remains of Frederick Frelinghuysen, Esq. Major General of the military forces and representative in the General Assembly of this, his native state. Endowed by nature with superior talents, he was beloved by his country. From his youth he was entrusted with the most important concerns until his death. He never disappointed her hopes. In the bar he was eloquent and in the Senate he was wise, in the field he was brave. Candid, generous and just, he was ardent in his friendships, constant to his friends. The patron and protector of his honorable merit. He gave his hand to the young, his counsel to the middle aged, his support to him that was feeble in years. To perpetuate his memory, his children have raised this monument, a frail memorial of their veneration to his virtues and of their grief and their loss of so excellent a father. He died on the 13th of April 1804, aged 51 years.