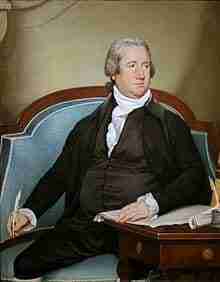 According to a false legend, Muhlenberg as House Speaker prevented German from becoming an official language of the United States. Nothing like that ever happened.

Frederick Muhlenberg was the son of Heinrich Melchior Mühlenberg, an immigrant from Germany and considered the founder of the Lutheran Church in America. His brother, Peter, was a General in the Continental Army and his brother Gotthilf Heinrich Ernst was a botanist. Muhlenberg was born in Trappe, Pennsylvania.

In 1763, together with his brothers John Peter Gabriel and Gotthilf Henry Ernst, he attended the Latina at the Franckesche Stiftungen in Halle, Germany. In 1769, he attended the University of Halle, where he studied theology. He was ordained by the Pennsylvania Ministerium as a minister of the Lutheran Church on October 25, 1770. He preached in Stouchsburg, Pennsylvania, and Lebanon, Pennsylvania, from 1770 to 1774, and in New York City from 1774 to 1776. When the British entered New York at the onset of the American Revolutionary War, he felt obliged to leave and returned to Trappe. He moved to New Hanover Township, Pennsylvania and was pastor there and in Oley and New Goshenhoppen until August 1779.

On October 15, 1771, he married Catherine Schaeffer, the daughter of wealthy Philadelphia sugar refiner David Schaeffer. They had seven children.

Muhlenberg was a member of the Continental Congress in 1779 and 1780, and served in the Pennsylvania House of Representatives from 1780 to 1783. He was elected its speaker on November 3, 1780. He was a delegate to and president of the Pennsylvania state constitutional convention in 1787 called to ratify the Federal Constitution. He was the first signer of the Bill of Rights.

He served as a delegate to the First and to the three succeeding United States Congresses (March 4, 1789 – March 4, 1797). Muhlenberg was also the first Speaker of the United States House of Representatives, including for the First Congress (1789–1791) and Third Congress (1793–1795). He did not seek renomination as Speaker in 1796. On 29 April 1796, as chairman of the Committee of the Whole, he cast the deciding vote for the laws necessary to carry out the Jay Treaty.

In 1794, during Muhlenberg’s second tenure as Speaker, the House voted 42-41 against a proposal to translate some of the laws into German. Muhlenberg, who himself abstained from the vote, commented later, “the faster the Germans become Americans, the better it will be.” Despite not having voted against the bill, a legend called the Muhlenberg Legend developed in which he was responsible for prohibiting German as an official language of the United States.

According to another legend, Muhlenberg also suggested that the title of the President of the United States should be “Mr. President” instead of “His High Mightiness” or “His Elected Majesty”, as John Adams had suggested.