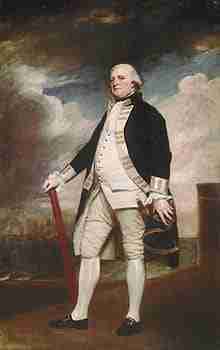 Darby joined the Royal Navy as a volunteer. He had received his first command in 1747 and his career was uneventful until the Seven Years’ War, in which he served under Admiral Rodney at the capture of Martinique in 1762. When in England, he lived at Newtown, Hampshire.

In the American Revolutionary War of 1775 to 1783, Admiral Keppel’s resignation during the crisis following the Battle of Ushant in 1778 left a vacancy for command of the Channel Fleet. In 1778 Darby became a Rear-Admiral and the following year was advanced to Vice-Admiral, thanks to his association with Lord Sandwich, First Lord of the Admiralty, during the court martial of Admiral Palliser. Thus he unexpectedly came to command the Channel Fleet in 1780 at a time of grave danger for Britain. He was also appointed one of the Lords of the Admiralty. In April 1781 he relieved Gibraltar from its siege by the Spanish, for the second time during that war. This event is recorded in a full-length portrait by George Romney, painted 1783–6, which hangs in the National Maritime Museum. On the change of ministry in 1782 he resigned his command and did not again serve at sea. He was Member of Parliament for Plymouth, 1780–1784. He was the uncle of Admiral Sir Henry D’Esterre Darby.