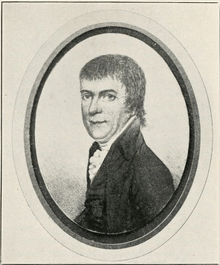 George Duncan Ludlow (1734 – November 13, 1808) was lawyer and a Puisne Judge of the Supreme Court of the British Province of New York in the Thirteen Colonies who became the first Chief Justice of New Brunswick in Canada.

George Ludlow was part of the British elite who served as Master of the Rolls and Chief Superintendent of the police for Long Island. A Loyalist during the American Revolution, in 1781 Ludlow abandoned his estate at Hempstead Plains to return to England. In 1784, he would be named the Chief Justice of the Supreme Court of the newly created Province of New Brunswick in Canada. James Putnam, Isaac Allen, and Joshua Upham were appointed as assistant judges. Justice Ludlow’s brother, Gabriel George Ludlow, was named the first mayor of the important port city of Saint John, New Brunswick.

A slave owner, George Ludlow built a large home on the Saint John River at Springhill, five miles above the new province’s capital of Fredericton. He married Frances Duncan with whom he had three children.

Ludlow served as Chief Justice of New Brunswick until his death in 1808.

His daughter Frances Duncan Ludlow (1766–1797) was the second wife of Richard Harison.

The village of Ludlow in Northumberland County is named in his honour.