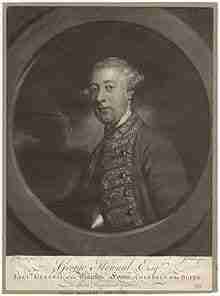 Born the son of Thomas Howard and his wife Mary, Howard was commissioned into his father’s regiment (later the 24th Regiment of Foot) in 1725. He commanded the 3rd Regiment of Foot at the Battle of Fontenoy during the War of the Austrian Succession.

He fought at the Battle of Falkirk and the Battle of Culloden during the Jacobite Rebellion and was accused of treating the defeated highlanders harshly.

He also took part in the Raid on Rochefort in 1757 and commanded a brigade at the Battle of Warburg in 1760 during the Seven Years’ War.

He was Colonel of the 7th (The Queen’s Own) Regiment of Dragoons and then the 1st (The King’s) Dragoon Guards. He was appointed Knight of the Bath in 1763.

He served in the House of Commons as Member of Parliament (MP) for Lostwithiel from 1761 to 1766 and for Stamford from 1768 until his death.