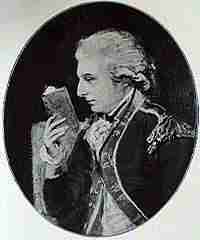 Colonel The Hon. George Napier (11 March 1751 – 13 October 1804) was a British Army officer, most notable for his marriage to Lady Sarah Lennox, and for his sons Charles James Napier, William Francis Patrick Napier and George Thomas Napier, all of whom were noted military officers, collectively referred to as “Wellington’s Colonels.” He also served as Comptroller of Army Accounts in Ireland from 1799 until his death in 1804.

On 22 January 1775 he married Elizabeth Pollock, and together they had one daughter, Louisa Mary Napier (died 1776).

On 27 August 1781 he married Lady Sarah Lennox, daughter of Charles Lennox, 2nd Duke of Richmond. He was described at the time as being “impoverished”. Her previous marriage had ended in scandal and divorce; George was Sarah’s second husband, Sarah was George’s second wife. Together they raised eight children, including three who were to become famed military officers:

In 1785 he moved his family to Celbridge in County Kildare, Ireland, where George eventually earned a post as Comptroller of Army Accounts. Lady Sarah was the sister of the very wealthy Lady Louisa Conolly and Emily FitzGerald, Duchess of Leinster who lived nearby. During the Irish Rebellion of 1798, in which one of the rebel leaders was his nephew Lord Edward FitzGerald, he is said to have armed his five sons, put his house in a state of defence, and offered an asylum to all who were willing to resist the insurgents.

In 1999, a 6-part miniseries called Aristocrats, based on the lives of Sarah Lennox and her sisters, aired in the U.K. George Napier appears at various ages in the series, played by Martin Glyn Murray and Jeremy Bulloch.

His grandson Colonel Napier brought the first pair of skis to Davos in 1888, starting the popular sport of Alpine skiing that had formerly been the activity of a few experts.