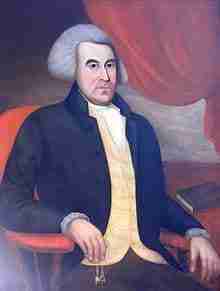 George Partridge (February 8, 1740–July 7, 1828) was an American teacher and politician. He represented Massachusetts as a delegate to the Continental Congress and as a Representative in the U.S. House.

Partridge was born in Duxbury, Massachusetts and attended Harvard College, graduating in 1762 and obtaining a Master’s degree in 1765. He studied theology but never entered the active ministry. Instead, he became a school teacher in Kingston, Massachusetts.

Gen. Gage said he had come over with his troops and proclamations to frighten us rebels into submission! We soon had his mandate, dissolving the General Court…So we met [in Salem]. And in a short time we began to ask one another, What can we do? The worst must come to the worst!…Shall we submit to Great Britain?…Or shall we resist her encroachments to the point of the sword?…The gulf is passed. We will have a Congress at Concord. We will send letters to all the colonies and urge them to send delegates to meet at Philadelphia…We will go to our homes and wake everyone that sleeps!

Partridge then served with the Massachusetts House of Representatives from 1775 to 1779. In 1779 the legislature named him a delegate to the Continental Congress. He was reappointed continuously until 1785, although he missed the session held in Princeton, New Jersey in 1783.

When the new government of the United States was installed Partridge was elected to the First United States Congress as a representative of {ushr|Massachusetts|5}. He served from March 4, 1789 until he resigned on August 14, 1790.

Partridge died at home in Duxbury in 1828 and is buried in the Mayflower Cemetery there.

Upon his death, Partridge bequethed $10,000 to form a private secondary school in Duxbury. This led to the establishment of Patridge Academy which was built on Tremont Street in Duxbury in 1844. The Academy served as the town’s only secondary school until the construction of the first Duxbury High School in 1927. Partridge Academy burned in 1933 and its location is presently occupied by the Duxbury Town Offices.