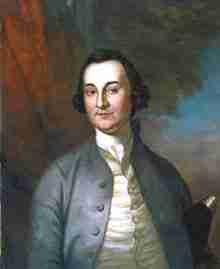 George Plater (November 8, 1735 – February 10, 1792) was an American planter, lawyer, and statesman from Saint Mary’s County, Maryland. He represented Maryland in the Continental Congress from 1778 to 1780, and briefly served as the sixth Governor of Maryland in 1791 and 1792.

Plater was born on the family plantation of Sotterley, near Leonardtown, Maryland. His father (also George) had married Rebecca Addison Bowles, the widow of the plantation’s founder, in 1729. After receiving his early schooling at home, he attended William and Mary in Williamsburg, Virginia, graduating in 1752. He read law and was admitted to the bar.

Plater was first elected to Maryland’s colonial Assembly in 1758, and served as a member for many years. He served on the Governor’s Council in 1773 and 1774. As the Revolution neared, he represented St. Mary’s County in the Annapolis Convention, which became a revolutionary government. When the ninth convention met in August 1776, Plater was on the committee which drafted Maryland’s first Constitution.

Under the new constitution, Plater served in the Maryland State Senate from 1777 until 1790. Maryland sent him as a delegate to the Continental Congress in 1778, and he represented his state through 1780.

When Maryland held a convention to consider the U.S. Constitution, Plater attended and was the president of the convention when they voted for ratification on April 28, 1788. The following year he was chosen as a Presidential elector. However, he did not vote.

In late 1791 Plater was elected Governor, and took office in December. However, his term was short; he died after less than three months in office.

Plater was an active Protestant who served twenty-eight years as a vestryman of St. Andrew’s Episcopal Church (which he helped to found and build).

He was married to Elizabeth Rousby, and they had six children: Rebecca, George, John, Thomas, Edward, and Ann. Rebecca was the grandmother of Alice Green, wife of H.H. Prince Don Angel Maria de Iturbide y Huarte, who were in turn the parents of H.H. Prince Don Agustín de Iturbide y Green- Head of the Imperial House of Mexico. George Plater’s son John Rousby Plater was a lawyer and judge and another son Thomas was a lawyer and would go on to represent Maryland in the United States House of Representatives. The eldest daughter, Rebecca married Uriah Forrest, statesman and military leader. Daughter Ann married Philip Barton Key. Their daughter Elizabeth Rousby Key was the wife of Louisiana’s fifth governor, Henry Johnson and a first cousin to Francis Scott Key.

When Plater died on February 10, 1792 in Annapolis, Maryland his body was returned home and buried at Sotterley, which still stands on the banks of the Patuxent River in St. Mary’s County. The house is maintained and operated as a museum by a foundation created for that purpose. The property is on Route 245, just outside of Hollywood, Maryland and is open to visitors during the summer (An entrance fee is charged).