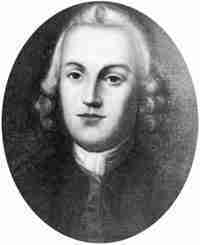 George Ross (May 10, 1730 – July 14, 1779) was a signer of the United States Declaration of Independence as a representative of Pennsylvania.

He was born in New Castle, Delaware, and educated at home. He studied law at his brother John’s law office, the common practice in those days, and was admitted to the bar in Philadelphia. Initially a Tory, he served as Crown Prosecutor for 12 years and was elected to the provincial legislature in 1768. There his sympathies began to change and he became a strong supporter of the colonial assemblies in their disputes with Parliament.

George’s sister Gertrude married Thomas Till, the son of William Till, a prominent Sussex County judge and politician; after his death, she married George Read, another signer of the Declaration. George Ross was born May 10, 1730 at New Castle Delaware. He was the oldest son in his family. His dad was an Anglican clergyman who had immigrated from Scotland. The Ross children received a sound classical education at home. He studied law at his half-brother John’s Law Practice in Philadelphia.

He was the last of the Pennsylvania delegation to affix his signature to the Declaration of Independence. He had been loyal to the King but he soon became disgusted with Tory politics and supported the cause of the Patriots.

In 1750, he was admitted to the Pennsylvania Bar (member of Pennsylvania) when he was twenty years old and he established his own practice in Lancaster. In 1751, he married Ann Lawler at Lancaster, Pa. He fathered two sons and a daughter. From 1768 to 1776, he was for twelve years Crown Prosecutor (which is attorney general) for Carlisle (Cumberland County), until 1778 when he was elected to the provincial legislature of his state.

He was elected to Continental Congress in 1774, 1776, 1777. He was a Colonel in the Continental Army in 1776. In 1776, he undertook negotiations with the northwestern Indians on behalf of his Colony and that year he acted as vice president of the State constitutional convention, so then that led to helping draft a declaration of rights. He was re-elected to the Continental Congress again in January 1777 but resigned that same year because of poor health. He was vice president of the Pennsylvania constitutional convention and was the Judge of the Admiralty Court of Pennsylvania in 1779. In 1778, while he was acting as admiralty judge, a congressional court of appeals overruled his decision in a case involving a dispute between a citizen of Connecticut and the state of Pennsylvania. He refused to acknowledge the authority of the higher court to counter State decisions, which initiated a dispute between manifestation of the states’ rights controversy and did not subside until 1809.

In 1779 he died in office at the age of 49, and is buried at Christ Church Burial Ground in Philadelphia.