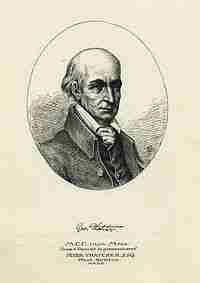 George Thatcher (April 12, 1754– April 6, 1824) was an American lawyer, jurist, and statesman from the Maine district of Massachusetts. His name sometimes appears as George Thacher. He was a delegate for Massachusetts to the Continental Congress in 1787 and 1788. He was an associate justice of the Massachusetts Supreme Judicial Court from 1801 to 1824.

Thatcher was born in Yarmouth, Province of Massachusetts Bay. After private tutoring, he attended Harvard, graduating in 1776. He read law and was admitted to the bar in 1778, and then moved to York to open a practice. By 1782 he had settled in Biddeford.

Thatcher was named as one of the Massachusetts delegates to the Continental Congress in 1787. He wrote under the name “Scribble Scrabble.” He was later elected a U.S. Congressman from the Maine district of Massachusetts, as a Pro-administration candidate in 1789 to 1792 and as a Federalist from 1794 to 1801. He did not seek re-election in 1800. At the time he left the Congress, he was the last original Congressman still in office.

Thatcher accepted an appointment to a Massachusetts state court in 1792 and served until 1800 when he was appointed to the state’s Supreme Judicial Court. During the organization of Maine’s statehood in 1819, he was a member of the convention that created the new state’s constitution. When statehood was achieved in 1820, he moved to Newburyport. He resigned from the court in January 1824, and retired to Biddeford.

Thatcher, an ardent Unitarian, helped to sponsor the creation of Bowdoin College so that Maine would have its own institution of higher education. For the college’s first dozen years, he served as a regent.

Thatcher died at his home, and is buried in the Woodlawn Cemetery at Biddeford.