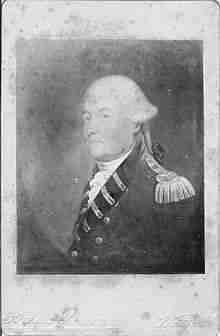 George Turnbull was a loyalist Lieutenant Colonel in the American Revolutionary War.

George Turnbull was born at Blackadder Mains in the county of Berwickshire (close to the Scottish/English border) in 1729. He served as a soldier mostly in North America for some 60 years, initially for some 10 years in Colonel Majoribanks’ Regiment of Scots. His will is dated 16 February 1809. He died in New York in 1810.