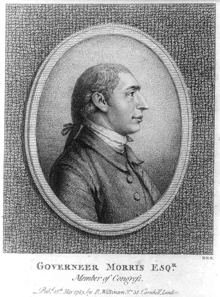 Gouverneur Morris (January 31, 1752 – November 6, 1816) was an American statesman, a Founding Father of the United States, and a native of New York City who represented Pennsylvania in the Constitutional Convention of 1787. He was a signatory to the Articles of Confederation. Morris was also an author of large sections of the Constitution of the United States and one of its signers. He is widely credited as the author of the document’s preamble, and has been called the “Penman of the Constitution.” In an era when most Americans thought of themselves as citizens of their respective states, Morris advanced the idea of being a citizen of a single union of states.

His first name came from his mother, whose maiden name was Sarah Gouverneur from a Huguenot family that had first moved to Holland then to New Amsterdam. A gifted scholar, Morris enrolled in 1764, at age 12, at King’s College, now Columbia College of Columbia University in New York City. He graduated in 1768 and received a Master’s degree in 1771.

On May 8, 1775, Morris was elected to represent his family estate in southern Westchester County (now Bronx County), in the New York Provincial Congress. As a member of the congress, he, along with most of his fellow delegates, concentrated on turning the colony into an independent state. However, his advocacy of independence brought him into conflict with his family, as well as with his mentor, William Smith, who had abandoned the patriot cause when it pressed toward independence. Morris was a member of the New York State Assembly in 1777–78.

After the Battle of Long Island in August 1776, the British seized New York City and his family’s estate across the Harlem River from Manhattan. His mother, a loyalist, gave the estate to the British for military use.

Morris was appointed as a delegate to the Continental Congress, and took his seat in Congress on 28 January 1778. He was immediately selected to a committee in charge of coordinating reforms of the military with George Washington. After witnessing the army encamped at Valley Forge, he was so appalled by the conditions of the troops that he became the spokesman for the Continental Army in Congress, and subsequently helped enact substantial reforms in its training, methods, and financing. He also signed the Articles of Confederation in 1778.

In 1779, he was defeated for re-election to Congress, largely because his advocacy of a strong central government was at odds with the decentralist views prevalent in New York. Defeated in his home state, he moved to Philadelphia, Pennsylvania, to work as a lawyer and merchant.

In 1780, Morris’s left leg was shattered and had to be amputated, resulting in Morris using a wooden pegleg. His contemporary account was that he broke his leg when mounting or driving his carriage, and that his leg then got caught in the spokes of one of the carriage wheels. Morris was well known for having many affairs, with both married and unmarried women, and jokes (some by Morris) and gossip caused some observers to later suggest that he injured his leg while fleeing a jealous husband.

Despite an automatic exemption from military duty because of his handicap and his service in the legislature, he joined a special “briefs” club for the protection of New York City, a forerunner of the modern New York Guard.

In Philadelphia, he was appointed assistant superintendent of finance (1781–1785), and he was a Pennsylvania delegate to the Constitutional Convention in 1787. He resumed his residence in New York in 1788.

Before the Constitutional Convention, Morris lived in Philadelphia where he worked as a merchant for some time. After that, he began to become interested in financial affairs, so he started to work with Robert Morris (no relation). Robert Morris and George Washington then recommended him for the convention because of what he did.

During the Philadelphia Convention, he was a friend and ally of George Washington and others who favored a strong central government. Morris was elected to serve on a committee of five (chaired by William Samuel Johnson) who drafted the final language of the proposed constitution. Catherine Drinker Bowen, in Miracle at Philadelphia, called Morris the committee’s “amanuensis,” meaning that it was his pen that was responsible for most of the draft, as well as its final polished form.

It is said by some that Morris was “an aristocrat to the core,” who believed that “there never was, nor ever will be a civilized Society without an Aristocracy”. It is also alleged that he thought that common people were incapable of self-government because he feared that the poor would sell their votes to the rich, and that consequently, he thought that voting should be restricted to property owners. Some historians write that Morris believed that. However, those statements about his beliefs are actually false. The context in which those statements by him were made shows a very different intended meaning for them. The source of those quotations is James Madison’s records of the Constitutional Convention in 1787 (at http://teachingamericanhistory.org/convention/debates/), and in particular their debates over “Property” (at http://press-pubs.uchicago.edu/founders/documents/v1ch16s16.html). These debates make clear that Morris actually favored the political order of the “Savage” over that of “Civilization,” and that he said, on 5 July 1787, “The savage State was more favorable to liberty than the Civilized.” This changes the meaning of his phrase “a civilized Society” when he said on 13 June 1787, that “there never was, nor ever will be a civilized Society without an Aristocracy.” Madison summarized Morris’s speech on 7 August 1787 by: “One of his principal objections to the Constitution as it is now before us, is that it threatens this Country with an Aristocracy.” Madison wrote: “It was the thing, not the name, to which he was opposed.” Madison then gave there Morris’s view as to how the inevitable natural tendency toward an aristocracy would be able to be thwarted or at least minimized by language in the Constitution. Morris did indeed fear on 7 August 1787, that, “Give the votes to people who have no property, and they will sell them to the rich who will be able to buy them.” In a sense, he was referring there to the situation that is now being debated regarding campaign-finance laws. The power of money to sway “elections” and “democracy” was very much a worry to the Founders. The issue was brilliantly discussed there by Morris, Franklin, and the others present. Reading this debate gives anyone who has a knowledge of the evolution of political philosophy the clear recognition that most of the representatives at the U.S. Constitutional Convention were actually geniuses, far in advance of the writings by the philosophers up to their time. The break away from the previous feudal order required such an assembly; and, seemingly miraculously, it actually happened.

Morris also opposed admitting new western states on an equal basis with the existing eastern states, fearing that the interior wilderness could not furnish “enlightened” statesmen to the country. Madison’s summary of Morris’s speech at the Convention, on July 11th of 1787, said that his view “relative to the Western Country had not changed his opinion on that head. Among other objections it must be apparent they would not be able to furnish men equally enlightened, to share in the administration of our common interests.” His reason given for that was regional: “The Busy haunts of men not the remote wilderness, was the proper school of political Talents. If the Western people get the power into their hands they will ruin the Atlantic interests.” In this fear, he turned out to be in the minority there.

At the convention he gave more speeches than any other delegate, a total of 173. As a matter of principle, he often vigorously defended the right of anyone to practice his chosen religion without interference, and he argued to include such language in the Constitution.

> He [Gouverneur Morris] never would concur in upholding domestic slavery. It was a nefarious institution. It was the curse of heaven on the states where it prevailed. Compare the free regions of the Middle States, where a rich & noble cultivation marks the prosperity & happiness of the people, with the misery & poverty which overspread the barren wastes of Va. Maryd. & the other States having slaves. … Proceed southwardly, and every step you take, through the great regions of slaves, presents a desert increasing with the increasing proportion of these wretched beings.

> Upon what principle is it that the slaves shall be computed in the representation? Are they men? Then make them citizens, and let them vote. Are the property? Why, then, is no other property included? The Houses in this city [Philadelphia] are worth more than all the wretched slaves which cover the rice swamps of South Carolina.

> The admission of slaves into the Representation when fairly explained comes to this: that the inhabitant of Georgia and S. C. who goes to the Coast of Africa, and in defiance of the most sacred laws of humanity tears away his fellow creatures from their dearest connections & damns them to the most cruel bondages, shall have more votes in a Govt. instituted for protection of the rights of mankind, than the Citizen of Pa. or N. Jersey who views with a laudable horror, so nefarious a practice.

He went to France on business in 1789 and served as Minister Plenipotentiary to France from 1792 to 1794. His diaries during that time have become a valuable chronicle of the French Revolution, capturing much of the turbulence and violence of that era, as well as documenting his affairs with women there. Unlike Thomas Jefferson, Morris was far more critical of the French Revolution and considerably more sympathetic to the deposed queen consort, Marie Antoinette.

He returned to the United States in 1798, and he was elected in April 1800, as a Federalist, to the United States Senate, filling the vacancy caused by the resignation of James Watson. He served from May 3, 1800, to March 3, 1803, but was defeated for re-election in February 1803.

On July 4, 1803 he was elected an honorary member of the New York Society of the Cincinnati.

After leaving the U.S. Senate, he served as Chairman of the Erie Canal Commission from 1810 to 1813. The Erie Canal helped to transform New York City into a financial capital, the possibilities of which were apparent to Morris when he said “the proudest empire in Europe is but a bubble compared to what America will be, must be, in the course of two centuries, perhaps of one.” There have been publishers who have described Morris’ religious affiliation as deism.

At the age of 57, he married Anne Cary (“Nancy”) Randolph, who was the sister of Thomas Mann Randolph, Jr., husband of Thomas Jefferson’s daughter, Martha Jefferson Randolph. Morris and his wife had a son, Gouverneur Morris Jr., who eventually became a railroad executive.

Morris’ half-brother, Lewis Morris (1726–1798), was a signer of the Declaration of Independence. Another half-brother, Staats Long Morris, was a loyalist and major-general in the British army during the American Revolution. His nephew, Lewis Richard Morris, served in the Vermont legislature and in the United States Congress. His grandnephew was William M. Meredith, United States Secretary of the Treasury under Zachary Taylor. Morris’ great-grandson, also named Gouverneur (1876–1953), was an author of pulp novels and short stories during the early-twentieth century. (Several of his works were adapted into films, including the famous Lon Chaney film, The Penalty.)

Morris died on November 6, 1816 after causing himself internal injuries while using a piece of whale bone to attempt clearing a blockage in his urinary tract. He died at the family estate, Morrisania, and was buried at St. Ann’s Church in the The Bronx.

Morris also established himself as an important landowner in northern New York, where the Town of Gouverneur and Village of Gouverneur in St. Lawrence County are named for him.

In 1943, a United States liberty ship named the SS Gouverneur Morris was launched. She was scrapped in 1974.