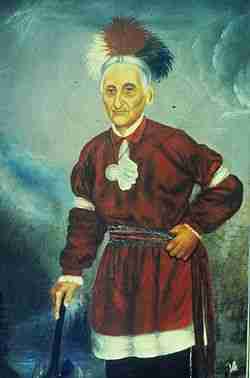 Tah-won-ne-ahs or Thaonawyuthe (born between 1737 and 1760, died 1859), known in English as either Governor Blacksnake or Chainbreaker, was a Seneca war chief, who, along with other Iroquois leaders (most notably Joseph Brant), fought on the side of the British during the American Revolutionary War from 1777 to 1783, most notably at the Battle of Oriskany.

He was born near Seneca Lake in western New York. His birth date has been given variously from circa 1760 to as early as 1737 (as is claimed on his gravestone, which was erected 1930, though it also erroneously claims him to have been on the side of the Continental Army during the Revolution). The 1737 birthdate would have made him 121 or 122 years old at the time of death; such an early date seems implausible as no man has been verified to have lived that long. What is known is that Chainbreaker lived an exceptionally long life. He must have been at or near adulthood by the time he became a war chief.

After his work on behalf of the British in the Revolutionary War, he became reconciled to the outcome of the war. He fought on the American side in the War of 1812 at the Battle of Fort George. He carried messages for the British on a trail that passed through today’s Napoli, New York. Governor Blacksnake “helped save the Oil Spring Reserve, laying the basis of the recently-settled land claim (June, 2005) over Cuba Lake.”

In later life, his political influence waned, as younger men of the Seneca assumed control.

Cornplanter and Handsome Lake were his maternal uncles. Blacksnake was a member of the Wolf Clan, as were they, whose traditional function for males was to serve as war chiefs. In the matrilineal system of kinship of the Iroquois, a child’s maternal uncles were very influential, as the child gained social status from his mother’s clan.

Blacksnake died on the Allegany Reservation in Cattaraugus County, New York. He is remembered by the Seneca Nation as “a man of rare intellectual and moral power.”