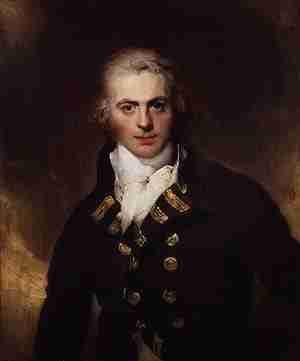 Admiral Sir Graham Moore, GCB, GCMG (1764–1843) was a British sailor and a career officer in the Royal Navy. He was the younger brother of General Sir John Moore.

Moore was born in Glasgow, Scotland, the son of the doctor and author John Moore, and Jean Simson. He entered the Navy in 1777 at the age of 13. He was promoted to lieutenant on 8 March 1782 to serve aboard {HMS|Crown|1782|2}, taking part in the relief of Gibraltar under Lord Howe, and the subsequent battle of Cape Spartel in October. During the peace he travelled through France, but was recalled to serve aboard {HMS|Perseus|1776|2}, {HMS|Dido|1784|2}, and then {HMS|Adamant|1780|2}, the flagship of Sir Richard Hughes on the North American Station. On 22 November 1790 he was promoted to commander in the sloop {HMS|Bonetta|1779|2}, before finally returning to England in 1793.

Moore was promoted to post-captain on 2 April 1794, soon after the start of the Revolutionary War, with command of the 32-gun frigate {HMS|Syren|1782|2}, in the North Sea and the coast of France. He then commanded the 36-gun frigate {HMS|Melampus|1785|2} from September 1795. In her he took part in the Battle of Tory Island on 12 October 1798, capturing the {Ship|French frigate|Résolue|1778|2|up=yes} two days later. In February 1800 he went out to the West Indies, but was invalided home after eighteen months.

Moore was then attached to Sir Robert Calder’s squadron blockading Ferrol. In 1808, he served as commodore, flying his broad pennant in the new ship {HMS|Marlborough|1807|2} assisting Admiral Sir Sidney Smith with the Portuguese royal family’s escape to Brazil, and was subsequently made a Knight of the Order of the Tower and Sword.

He later served as part of the North Sea fleet for several years. At the close of the Walcheren campaign in December 1809, he was entrusted with destroying the basin, arsenal, and sea defences of Flushing.

Moore died at his home, Brook Farm, Cobham, Surrey, on 25 November 1843, and was buried at St. Andrew’s Church.

Moore kept a detailed diary from 1784 until 1806, later published in thirty-seven volumes, which provides a unique account of his service as a lieutenant, commander and captain.