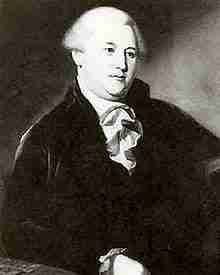 Gunning Bedford, Jr. (1747 – March 30, 1812) was an American lawyer and politician from Wilmington, in New Castle County, Delaware. He served in the Delaware General Assembly, as a Continental Congressman from Delaware and as a delegate to the U.S. Constitutional Convention of 1787. He is often confused with his cousin, Gunning Bedford, Sr. an officer in the Continental Army during the American Revolution and Governor of Delaware.

Bedford was born in Philadelphia, Pennsylvania, raised in Delaware and a graduate of Princeton University.

He was first elected to the Legislative Council of the Delaware General Assembly, later known as the Delaware House of Representatives. He served 4 terms from 1783/84 until 1786/87. He then served one term of three years, 1788/89 through 1790/91, in the Legislative Council, later known at as the State Senate. He was the first Attorney General of Delaware, serving from 1778 until 1790. He was also a delegate to the Federal Constitutional Convention in 1787.

Bedford was the most vocal supporter of giving small states equal power in the federal government to large states. His experience in local politics, along with his service in the Continental Congress, taught him much about the political and economic vulnerabilities of states like Delaware. Unlike some other small-state representatives who looked to the creation of a strong central government to protect their interests against more powerful neighbors, Bedford sought to limit the powers of the new government. But when the conflict over representation threatened to wreck the Constitutional Convention, he laid regional interests aside and, for the good of the country, sought to compromise.

Concerned primarily with the fate of the small states in a federal union potentially dominated by powerful, populous neighbors, the fiery Bedford warned the delegates at Philadelphia that the small states might have to seek foreign alliances for their own protection. Bedford’s threat, “the small ones would find some foreign ally of more honor and good faith, who will take them by the hand and do them justice” was shouted down as treasonous by the other delegates. At first he joined with those who sought merely to amend the Articles of Confederation, believing, as one delegate contended, “there is no middle way between a perfect consolidation of the states into one nation and a mere confederacy of the states. The first is out of the question, and in the latter they must continue if not perfectly yet equally sovereign”.

But when the idea of drafting a new Constitution was accepted, he supported the New Jersey Plan, a scheme that provided equal representation for the states in the national legislature, a point on which the Delaware legislature had instructed its delegates not to compromise. He called for strong limitations on the powers of the executive branch and recommended measures by which the states could maintain close control over the national legislature and judiciary, including the appointment of federal judges by the state legislatures. Bedford’s speeches in support of these ideas led Georgia delegate William Pierce to describe him as a “bold” speaker, with “a very commanding and striking manner;” but “warm and impetuous in his temper and precipitate in his judgement”.

Realizing as the Convention sessions went on that unyielding adherence to his position would endanger the union, Bedford adopted a more flexible stance. He agreed to sit on the committee that drafted the Great Compromise, which settled the thorny question of representation and made possible the Convention’s acceptance of the new plan of government.

Bedford was a delegate to Delaware’s ratification convention in 1787. Thanks to his efforts, along with those of John Dickinson, Richard Bassett, and others, Delaware became the first state to approve the Constitution. Widely respected for his knowledge of the law, Bedford was asked by Delaware’s senators and fellow signers George Read and Richard Bassett to review a bill, then under consideration, on the organization of the federal judiciary system.

Bedford praised the document, which would become the Judiciary Act of 1789, one of the most important pieces of legislation of the period, as a “noble work;” but expressed some concerns as well. He admitted that the common law of the United States was difficult to define. “Yet”, he claimed, “the dignity of America requires that it [a definition] be ascertained, and that where we refer to laws they should be laws of our own country. If the principles of the laws of any other country are good and worthy of adoption, incorporate them into your own”. He believed the Constitution’s ratification had been the moment of “legal emancipation”, declaring that “as the foundation is laid so must the superstructure be built”.

On September 24, 1789, Bedford was nominated by President George Washington to be the first judge for the United States District Court for the District of Delaware, a position created by 1 Stat. 73. Bedford was confirmed by the United States Senate on September 26, 1789, and received his commission the same day. He held the position until his death. He resigned his post as Delaware’s attorney general in 1790.

Bedford never lost educational interest in his local community. Believing the establishment of schools “is, on all hands, justly acknowledged to be an object of first importance,” he worked for the improvement of education in Wilmington. He was president of the Board of Trustees of Wilmington Academy, and when that institution became Wilmington College, he became its first president. He also served as the first Grand Master of the Delaware Masonic Lodge.

He died at Wilmington and was buried first in the Presbyterian Cemetery there. This cemetery is now the location of the Wilmington Institute Library and his remains were then moved to the Masonic Home Cemetery at Christiana, Delaware.

Bedford Street in Madison, Wisconsin is named in his honor.

Elections were held October 1 and members of the General Assembly took office on October 20 or the following weekday. State Legislative Councilmen had a three-year term and State Assemblymen had a one-year term.