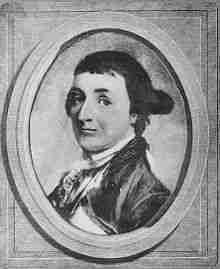 Gustavus Conyngham (about 1744 – 27 November 1819) was born in County Donegal, Ireland, and was a merchant sea captain, officer in the Continental Navy and a privateer.

Conyngham’s story begins in a typical fashion for the era. Born in County Donegal in 1745, he came to America in 1763 seeking a better life. Conyngham immigrated to Philadelphia in order to work for his cousin Redmond Conyngham in the shipping industry. He abandoned school at a young age, sensing that his destiny lay not in the academic world, but on the oceans. Here he learned and perfected his seamanship skills, becoming an apprentice to Captain Henderson, who became a surrogate father to the young Gustavus. Eventually Conyngham progressed enough to be given charge over his own craft, the Charming Peggy. When the Revolutionary War began in 1775, he immediately sailed to Europe to try to procure supplies needed for the war effort.

==Escape from the British==

Because Great Britain was patrolling for any arms deals, he had arranged a transaction with Dutch traders in order to safely transfer the goods. However, he was caught in becalmed winds for too long – the British were able to find him based on a tip from a mutinous sailor. Andrew Frazer, the English official in charge of Conyngham’s arrest, placed a guard on board the Charming Peggy and ordered her to set sail for England as soon as the winds prevailed. However, once the weather turned, Conyngham and his crew overpowered the guard and made a daring escape. Despite their best efforts though, the wind died shortly after, leaving them stranded once again. This time, instead of waiting to be captured, Conyngham sold the Charming Peggy to the Dutch government in order to be able to purchase a new ship when under less suspicion. However, due to corruption and embezzlement within the government itself, he was never given any profits from the sale of his ship, and was forced to find another way to accomplish his mission.

After the loss of his ship, Conyngham headed to France, hoping to connect with an ally to the United States. It was there he met Benjamin Franklin, a man who would help him in his adventures many times in the future. They formed a lasting relationship, and Conyngham eventually awarded Franklin the nickname “the Philosopher” for his intellectual fortitude and resourcefulness . Franklin had been entrusted with several commissions of the Continental Navy, and on March 1, 1777 Conyngham was appointed as Captain of the lugger Surprise. He quickly went to work, heading towards the narrow English Channel and capturing the Prince of Orange and the Joseph within a week. The Prince of Orange was holding mostly mail, so he sent it to Dunkirk to be unloaded, but the Joseph was holding more valuable cargo such as wine and oranges, and was sent to France as a prize. Unfortunately for Conyngham, France had a treaty with England that forbade the selling of commandeered good in French ports, and when Lord Stormont, an English official, heard of Conyngham’s actions he demanded that France return the Joseph and arrest him. Not ready to commit to a war with England, French officials bowed to Lord Stormont’s demands, turning over the Joseph and calling for Conyngham’s arrest. He was sent to a French prison under charges of piracy.

==Success aboard the Revenge==

Again, it was Conyngham’s friend “The Philosopher” that came to his rescue. Recognizing that Conyngham was a talented sailor from his clever avoidance of the British within their own channel, Franklin set about obtaining a new ship for him. However, this was no easy task in Europe at the time – England was watching the construction of new ships and was prepared to burn any vessel they felt was being built to aid the American cause. Therefore, the ship was built as the Greyhound, and Franklin had installed false buyers in order to further confound the English. One of the buyers, Richard Hodge, then sailed the ship into the ocean, where Conyngham boarded it and took command, renaming the vessel Revenge.

Having more tonnage, maneuverability, and firepower than the Surprise, Conyngham immediately set to work terrorizing British shipping with twice the ferocity of before. It was here that he earned his nickname “the Dunkirk Pirate”, ignoring his written orders to proceed directly to the American coastline for logistical support and resupply and instead heading directly to Dunkirk to begin his cruise against the British. In his first cruise, he averaged one ship every three days, sinking or capturing over twenty ships during his two month stay in the Baltic and North Sea. He then sailed to Cap Ferrol in order to resupply and replace his crew. He then headed to the West Indies, continuing to use Spain as his primary base of operations. Over the next eighteen months he captured or sunk sixty ships, causing a 10% rise in British shipping insurance rates between Dover and Calais. This brought the expenses associated with shipping to their all time highest level, outpacing their rates even during England’s wars with France and Spain. Dozens of merchants resorted to paying French and Dutch ships to carry their goods for fear of the Dunkirk Pirate’s vengeance. It was reported that the King of England himself said that it would give him great pleasure to be present at the hanging of Conyngham, if he could only catch him. Even the weather could not contain him. When his ship was badly damaged by a storm in English waters, he disguised the Revenge and sailed into an English port to be repaired, reverting to his native Irish tongue to maintain anonymity. When Conyngham was offered a seventy-four gun Spanish vessel for protection against two small British ships that planned to ambush him, he “thanked him for his offer, but told him he was not afraid of fifty of their boats, all he wished is that they might make the attempt, and if they did, they would never live to make another.”

Conyngham’s reign of destruction off of the English coastline only ended when he captured a ship carrying valuable wartime supplies, which he deemed worthy of an escort to American shores. He arrived in Philadelphia on 21 February 1779 with his goods in tow. It was then that his luck began to turn sour.

==First return to America and imprisonment==

It is ironic that the first friendly port Conyngham had seen in years would treat him so poorly. Though the local newspapers hailed him as a returning war hero, the Continental Congress was less than pleased with his disobedience to orders and his loss of his original commission, which had been confiscated by the French during his brief stay in their prison. Adding to this, as Conyngham was not the owner of the Revenge, it was sold at a private auction. However, because Conyngham had been so successful as her captain, he was again given command with orders to raid British shipping for a private profit. However, during one of his first cruises he was unable to outrun the British warship Galatea, and was taken aboard as a prisoner. As his notoriety had grown since his last capture, the British treated him very poorly. Since he did not have a commission at the time, and he was arrested for piracy and sent to the English prison at Pendennis Castle, where he escaped, only to be caught again and transferred to Mill Prison, Plymouth. By his own report he was kept in irons until he reached prison, and was given no more than a “cold plank as my bed, a stone for a pillow”. Additionally, he was not fed properly, causing him to lose fifty pounds while imprisoned on the ship en route to his English prison. He was kept in irons continuously at both Pendennis Castle and Mill Prison. In fact, it was only by the watchful hand of Benjamin Franklin that Conyngham was kept from the gallows. Franklin wrote to General George Washington about Conyngham’s missing commission, and Washington wrote to the British saying that if Conyngham met with the noose, he would hang six of the British officers he had captured. However, despite these conditions, he refused to accept the invitation to leave prison by joining the British Navy. In fact, while in prison he aided in the creation of a document stating that each member who signed would not leave the American cause regardless of how terrible the conditions became. Conyngham was placed on trial for high treason, but before his sentence was determined and carried out he escaped. Conyngham and eleven other prisoners had broken into the prison vault allowing them to use tools to dig a tunnel extending “a considerable distance” underneath the outer wall of the prison . Had a boy’s arm not been broken during the scramble for the exit, alerting the sentries, hundreds more prisoners may have escaped with him.

==Escape and return to America==

After his escape, Conyngham fled to Texel Island in the Netherlands to try to find a way back to America where he could potentially receive a new ship. His spirits were high – he reported later that he was amused by the portrayals of himself as a monster that he saw displayed all over London while in disguise. He planned on making his way back to France where he could again enlist the help of his friend Benjamin Franklin, but instead met with a stroke of luck. While he was resting in Texel, John Paul Jones arrived in port after his battle with the Serapis. Jones took him aboard, and they cruised together for several months until Conyngham left the Alliance at a Spanish port in order to board a ship headed for American shores. However, it was here that Conyngham’s luck ran out once again. While aboard the Experiment en route to America, he was recaptured by the British on 17 March 1780, and sent back to Mill Prison in Plymouth. He remained there until his release due to a political prisoner exchange. This time, he headed for Ostend, where he obtained the armed vessel Layona, which he prepared to go cruising in once again. However, he received news of a treaty, and instead boarded the Hannibal, which was on its way back to his hometown of Philadelphia.

In many ways, his second return to the United States earned him a colder welcome than the last. The Continental Congress refused to pay him properly for his work because of his inability to produce his commission, which had been confiscated from him by the French almost three years ago. Because Benjamin Franklin had given him an official commission, he was not merely a privateer, but an actual Captain in the United States Navy. As such, he was entitled to two-twentieths of the value of the ships he took as prizes. As he could not produce his commission, and Benjamin Franklin passed on before he could give proper testimony of Conyngham’s commissioning, the Continental Congress refused to pay him what he was due, and instead treated him as a common privateer during his earliest and most successful raids. However, despite his quarrels with the government, he still continued to serve his country. During the Quasi-War with the French, he captained the Maria, an armed merchant vessel, bringing much needed supplies to the front lines. Towards the end of his life, he was elected to the Common Council of Philadelphia, and managed to raise thirty thousand dollars in loans from the population in order to defend the city during the War of 1812. He never allowed his quarrels with politicians come between his commitment to his country. He died quietly in his home on 27 November 1819.

Three ships in the United States Navy have been named USS Conyngham for him. Conyngham Borough, Luzerne County, Pennsylvania was named in his honor. 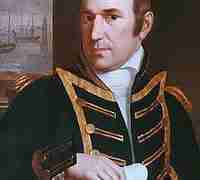