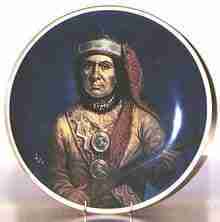 Guyasuta (c.1725–c.1794) was an important leader of the Seneca people in the second half of the eighteenth century, playing a central role in the diplomacy and warfare of that era. His name is phonetically rendered as KayahsotaÃ, and the many spelling variations included Kiasutha, Kiasola, and Kiashuta.

Guyasuta probably served as a scout for young George Washington in 1753, though he played a role in defeating the Braddock Expedition in 1755, and sided with the French in the French and Indian War. Guyasuta was a major player in Pontiac’s Rebellion—indeed, some historians once referred to that war as the Pontiac-Guyasuta War.

At the outset of the American Revolutionary War, the American revolutionaries attempted to win Guyasuta to their cause but, like most Iroquois, he sided with the British, taking part in the Battle of Oriskany. After the war, the aging Guyasuta worked to establish peaceful relations with the new United States.

Guyasuta was a maternal uncle to Cornplanter and Handsome Lake.

In Pittsburgh, he is honored, along with George Washington, in a large public sculpture called “Point of View”, which overlooks Point State Park. Also the Laurel Highlands Council of the Boy Scouts of America has a camp property named in his honor. A statue of Guyasuta stands at the intersection of Main and North Canal Streets in Sharpsburg, Pennsylvania.