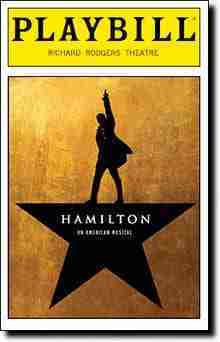 Hamilton is a musical about the life of American Founding Father Alexander Hamilton, with music, lyrics and book by Lin-Manuel Miranda.[1] The show, inspired by the 2004 biography Alexander Hamilton by historian Ron Chernow, achieved both critical acclaim and box office success.
The musical made its Off-Broadway debut at The Public Theater in February 2015, where its engagement was sold out.[2] The show transferred to Broadway in August 2015 at the Richard Rodgers Theatre. On Broadway, it received enthusiastic critical acclaim and unprecedented advance box office sales,[3] as well as a Grammy Award for Best Musical Theater Album and the Pulitzer Prize for Drama. The Off-Broadway production of Hamilton won the 2015 Drama Desk Award for Outstanding Musical as well as seven other Drama Desk Awards out of 14 total nominations, while the Broadway production was nominated for a record-setting 16 Tony Awards.

For more details, visit Wikipedia (where some of this information is from), and the muscial’s website