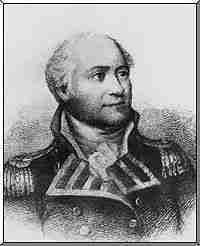 In the Revolutionary War, he fought at the Battle of Bunker Hill, Brandywine, Germantown and Monmouth. After the Revolutionary War, he was assigned to protect the arsenal at Springfield, Massachusetts in the aftermath of Shays’ Rebellion. He then served on the Court of Inquiry that investigated General James Wilkinson and he served on the court for his subsequent court marshal in 1811.

Henry Burbeck was born in Boston on June 10, 1754, the son of Jerusha Glover and William Burbeck of Boston. His father was a British colonial officer in the ordnance department and second in command of Old Castle William in Boston Harbor, but gave up his commission and supported the patriot cause when hostilities broke out.

Burbeck’s education consisted of a public writing school in the North End of Boston under John Tileston (1735–1826). He would later credit his father with the remainder of his education. Prior to his military service, Henry worked at the coppersmith’s forge with Paul Revere.

He was assigned as a lieutenant of artillery to the Massachusetts line commanded by Colonel Richard Gridley, the Continental Army’s first Chief Engineer and artillery commander, in 1775.

In 1777, he briefly joined the army at Saratoga until he was assigned to Pennsylvania to join Gen. George Washington’s army. He fought in the battles of Brandywine, Germantown. He remained in the Artillery Corps under General Henry Knox and, in 1777, assumed command of a company of the 3rd Continental Artillery Regiment. He marched with Gen. Washington and his men from Valley Forge to New Jersey in 1778. Following the march, he fought in the Battle of Monmouth.

His unit was sent North and he remained in White Plains New York, to defend the Hudson Highlands from 1779-1783. He marched into New York when the British army evacuated that city at the close of the Revolutionary War.

Burbeck knew General George Washington personally from his service and it was from Burbeck’s associations with foreign officers serving in the American Revolution that he recognized the need to educate and train the army in artillery and engineering. Burbeck recommended the establishment of West Point military academy.

Honorably discharged in January 1784, Burbeck was reappointed captain of artillery, commanded by Major John Dougherty, in October 1786 and commanded the post at West Point, New York, in 1787-1789. In 1787, he was ordered by General Knox to Springfield, Massachusetts to protect the arsenal there is the aftermath of Shays’ Rebellion. His wife Abigail died in June 1790 in Bath, Maine.

He commanded the Army’s Battalion of Artillery and served as General Anthony Wayne’s Chief of Artillery in the Northwest Indian War in 1792-1794. He was ordered, on August 29, 1789, to Georgia to serve as a guard to Major General Benjamin Lincoln and Colonel Humphries during the unsuccessful treaty negotiation with the Creek people. He returned to Georgia in 1790 and built a fort on the St. Mary’s River.

He was promoted to Major Commandant of the Artillery on March 16, 1792. Burbeck established Fort Recovery in Ohio in 1794 which was named after the lost cannons that were recovered at the site of in the aftermath of St. Clair’s defeat by the Indians in 1791. Burbeck buried 200 skulls and numerous bones from Arthur St. Clair’s defeat and interred them as two brass cannons from the 1791 action, recovered by Burbeck in the Wabash, were discharged in their honor.

Burbeck oversaw the transfer of power from British to American control of Fort Mackinac in 1796, 13 years after the Treaty of Paris was signed. He served at the fort through 1799.

From 1798 to 1802, Burbeck was the senior regimental commander of artillerists and engineers. He also commanded the Eastern Department of the Army in 1800 and in that year endorsed the creation of a corps of engineers separate from the artillerists. He was Chief of the new Artillery Corps from 1802 to 1815, first as a colonel and then during the War of 1812 as a brevet brigadier general.

In 1808, he served on the Court of Inquiry, ordered by President Madison, held at Morin’s Tavern in Philadelphia, investigating General James Wilkinson for receiving a pension from the Spanish government while serving in the United States military. Previously, Wilkinson had been a member of the Conway Cabal against Washington and resigned from the army. He received the governorship of Louisiana by Thomas Jefferson in 1805. Wilkinson’s close relationship with the Spanish government led to a confrontation with Aaraon Burr which ultimately resulted in accusations that Wilkinson was tied to the Spanish government. Other members of the Court of Inquiry included Col. Cushing of the Infantry and Col. Williams of the Engineers. In September 1811, during the court marshal, Wilkinson took exception to the presence of Burbeck and two other members of the court and they were all replaced. Wilkinson was found not-guilty on December 25, 1811.

At the beginning of the War of 1812, Burbeck was summoned to New London, Connecticut to relieve Jirah Isham of the command of the state militia. While stationed in New London, he received orders to march to Boston to take command there during the blockade by a British squadron commanded by Commodore Sir Thomas Hardy. The winter march resulted in the suffering of many of the men under his command who were frostbitten from exposure to the winter elements. During the march, Burbeck refused any favors offered to him that were not also given to his men.

After returning to New London, in July 1813, he received a letter from Gen. Armstrong which enclosed a copy of a letter written by the Governor of Virginia stating that information from British deserters indicated that British transports, under Admiral George Cockburn, sailed from Chesapeake Bay to New London, Connecticut. Burbeck responded by organizing the state militia to respond while Hardy’s fleet lay off New London harbor. Burbeck continued in command of New London to the end of the war.

He married Lucy Elizabeth Rudd Caldwell on December 13, 1813 in New London, Connecticut. She was the daughter of Corp. Daniel Rudd, Jr. and Abigail Allen. She was first married to Capt. Henry Caldwell of the Marines who died March 12, 1812 at Charlestown, Massachusetts. Caldwell was on the Little Belt during the Little Belt Affair, an event that is regarded as one of the causes of the War of 1812, and he testified during the Court of Inquiry on the Little Belt Affair which convened in New York in September 1811. Lucy was a descendant of Gov. William Bradford (1590-1657) of the Mayflower and Jonathan Rudd who was married, in a legendary ceremony, at Bride Brook in what is now East Lyme, Connecticut in December 1646. Burbeck was the same exact age as Lucy’s father Daniel Rudd, Jr., both being born on June 10, 1754. At the time of his marriage to Lucy, Burbeck was 29 years her senior.

Gen. Burbeck purchased a home at 114 Main St., in New London, Connecticut, it 1815. The house was built in 1735 and was one of the few houses in New London that remained after the city was burned by the British in 1781. Gen. Burbeck and his wife lived in the house until he died in 1848.

Burbeck hoped that his son Henry would follow in his military footsteps, but Henry died when he tried to test his strength by lifting a keg of silver dollars which fell on his foot and severed his toe while at sea on a revenue cutter. By the time the cutter reached New York and a physician was summoned, it was too late and he died. Thereafter, Gen. Burbeck was so overcome by grief that he would not have his son’s name spoken in his house.

In his later years, he enjoyed the company of Capt. Bulkeley who also retired to New London. They maintained a close relationship despite the fact that Burbeck was a Whig and Bulkeley was a Democrat.

Burbeck died at his home on Main Street on October 2, 1848 in New London, Connecticut just months after his friend Capt. Bulkeley died. The Massachusetts Society of Cincinnati, of which Burbeck was a member, erected a monument to him in Cedar Grove Cemetery (Sec. 4, Lot 1), New London, Connecticut. The inscription on the monument states:

The Massachusetts Society of the Cincinnati Dedicate This Monument to the Memory of Their Late Honored President. He Was An Officer of the Army From the Commencement of the Revolutionary War Until The Close of His Life By a Patriotic and Faithful Discharge of the High and Responsible Duties of a Gallant Soldier And An Exemplary Citizen He Has Been Justly And Eminently Distinguished As He Was Rightfully and Universally Respected.

His wife Lucy died February 22, 1880 in New London and at the time of her death was one of the last in the nation to receive a Revolutionary War pension which was $130 a quarter in 1875. Burbeck’s daughter Charlotte was made an honorary member of the Lucretia Shaw chapter of the Daughter’s of the American Revolution.