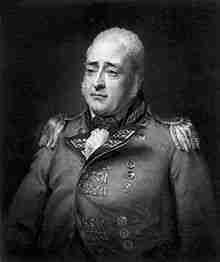 As a son of Henry Fox, first Baron Holland and his second wife, (Georgiana) Caroline Fox, née Lennox, he was a younger brother of the politician Charles James Fox (1749–1806).

He attended Westminster School before being commissioned as a cornet in the 1st dragoon guards in 1770. Soon after that he spent 1 year’s leave at the military academy at Strasbourg. After his return he rose to lieutenant (1773) then captain (1774).

In 1773 he moved to the 38th Regiment of Foot, stationed at Boston, and fought in the American War of Independence (spending 1778-79 on leave in England). By the end of the war he had risen to colonel and king’s aide-de-camp, and he then moved to command the forces in Nova Scotia (1783–89), where he was influential in the creation of the new colony of New Brunswick, and then the Chatham barracks (1789–93).

Next he was quartermaster-general on the duke of York’s staff in Flanders to replace the recently killed James Moncrieff (1793–95) and fought in the Netherlands theatre of the French Revolutionary Wars. He then served as inspector-general of the recruiting service (1795–99), lieutenant-governor of Minorca (1799–1801), c-in-c of all British Mediterranean forces outside Gibraltar (1801–03, replacing the killed General Sir Ralph Abercromby at the battle of Aboukir) and finally Commander-in-Chief, Ireland (1803). In Ireland he was caught off-guard by Robert Emmet’s Dublin uprising (22 July 1803) and was quickly replaced by Lieutenant-General Cathcart, whose appointment was gazetted on 20 October.

Fox moved to be commander of the London district (1803), Lieutenant-Governor of Gibraltar (1804–06), Commander-in-Chief in the Mediterranean (1806–07) and minister to Sicily. With his health weakening, Fox passed active command of the force to his deputy, Lieutenant-General Sir John Moore. The smallness of his force (made yet smaller when Major-General Mackenzie Fraser was sent to occupy Alexandria) meant he refused the repeated requests from the Sicilian court and William Drummond, British minister at the Sicilian court, for land operations on the Italian mainland. Fox and Moore also opposed the naval commander William Sidney Smith’s political machinations at the Sicilian court, contrary as they were to the army’s tactics for the Italian theatre, until Fox’s ill health finally led to his being recalled by the British government and replaced by Moore. Fox was promoted full general on 25 April 1808 and appointed governor of Portsmouth in 1810, dying the following year.

On 14 November 1786 he married Marianne Clayton, daughter of William Clayton, 4th Baronet and sister of Catherine, Lady Howard de Walden, and they had 3 children