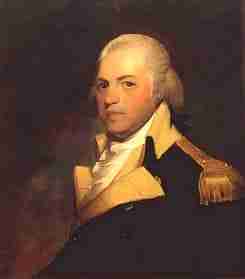 Henry Lee III (January 29, 1756 – March 25, 1818), also known as Light-Horse Harry Lee, was an early American patriot who served as the ninth Governor of Virginia and as the Virginia Representative to the United States Congress. During the American Revolution, Lee served as a cavalry officer in the Continental Army and earned the nickname “Light-Horse Harry”. Lee was the father of Confederate general Robert E. Lee.

Lee was born near Dumfries, Virginia, the son of Henry Lee II (1730–1787) of “Leesylvania” and Lucy Grymes (1734–1792) the “Lowland Beauty”. His father was the second cousin of Richard Henry Lee, twelfth President of the Continental Congress. His mother was an aunt of the wife of Virginia Governor Thomas Nelson, Jr. His great-grandmother Mary Bland was also a grand-aunt of President Thomas Jefferson.

Lee graduated from the College of New Jersey (now Princeton University) in 1773, and began pursuing a legal career. With the outbreak of the Revolutionary War, he became a captain in a Virginia dragoon detachment, which was attached to the 1st Continental Light Dragoons. In 1778, Lee was promoted to major and given the command of a mixed corps of cavalry and infantry known as Lee’s Legion, with which he won a great reputation as a leader of light troops. At that time, such military groups would engage the enemy using what is now known as guerrilla tactics.{cn|date = January 2014}

It was during his time as commander of the Legion that Lee earned the sobriquet of “Light-Horse Harry” for his horsemanship. On September 22, 1779 the Continental Congress voted to present Lee with a gold medal—a reward given to no other officer below a general’s rank—for the Legion’s actions during the Battle of Paulus Hook in New Jersey, on August 19 of that year.

Lee was promoted to Lieutenant Colonel and was assigned with his Legion to the southern theater of war. Lee’s Legion raided the British outpost of Georgetown, South Carolina with General Francis Marion in January 1781 and helped screen the American army in their Race to the Dan River the following month. Lee united with General Francis Marion and General Andrew Pickens in the spring of 1781 to capture numerous British outposts in South Carolina and Georgia including Fort Watson, Fort Motte, Fort Granby, Fort Galphin, Fort Grierson, and Fort Cornwallis, Augusta, Georgia. They conducted a campaign of terror and intimidation against Loyalists in the region, highlighted in Pyle’s Massacre. Lee and his legion also served at the Battle of Guilford Court House, the Siege of Ninety-Six, and the Battle of Eutaw Springs. He was present at Cornwallis’s surrender at Yorktown, but left the Army shortly after claiming fatigue and disappointment with his treatment from fellow officers. During the infamous Whiskey Rebellion, Lee commanded the 13,000 militiamen sent to quash the rebels.{cn|date = January 2014}

Between April 8 and 13, 1782, at Stratford Hall, Lee married his second cousin, Matilda Ludwell Lee (1764–1790), who was known as “the Divine Matilda”. Matilda was the daughter of Philip Ludwell Lee, Sr., and Elizabeth Steptoe. Matilda had three children before she died in 1790:

On June 18, 1793, Lee married the wealthy Anne Hill Carter (1773–1829) at Shirley Plantation. Anne was the daughter of Charles Carter, Esq., of Shirley, and his wife Ann Butler Moore. She was also a descendant of King Robert II of Scotland through the 2nd Earl of Crawford. They had six children:

From 1786 to 1788, Lee was a delegate to the Continental Congress, and in the last-named year in the Virginia convention, he favored the adoption of the United States Constitution. From 1789 to 1791, he served in the General Assembly and, from 1791 to 1794, was Governor of Virginia.

In 1794, Lee accompanied Washington to help the suppression of the Whiskey Rebellion in western Pennsylvania. A new county of Virginia was named after him during his governorship. Henry Lee was a major general in the U.S. Army in 1798–1800. From 1799 to 1801, he served in the United States House of Representatives of the Congress. He famously eulogized Washington to a crowd of 4,000 at the first President’s funeral on December 26, 1799: “first in war, first in peace, and first in the hearts of his countrymen.”

The Panic of 1796–1797 and bankruptcy of Robert Morris reduced Lee’s fortune. He served one year in debtors’ prison in Montross, Virginia, when his son Robert E. was two.

On July 27, 1812, Lee received grave injuries while helping to resist an attack on his friend, Alexander Contee Hanson, editor of the Baltimore newspaper, The Federal Republican. Hanson was attacked by Democratic-Republican mob because his paper opposed the War of 1812. Lee and Hanson and two dozen other Federalists had taken refuge in the offices of the paper. The group surrendered to Baltimore city officials the next day and were jailed. Laborer George Woolslager led a mob that forced its way into the jail, removed the Federalists, beating and torturing them over the next three hours. All were severely injured, and one Federalist, James Lingan, died.

Lee suffered extensive internal injuries as well as head and face wounds, and even his speech was affected. Lee later sailed to the West Indies in an effort to recuperate from his injuries. He died on 25 March 1818, at Dungeness, on Cumberland Island, Georgia.

Lee was buried with full military honors provided by an American fleet stationed near St. Marys. In 1913 his remains were removed to the Lee family crypt at Lee Chapel, on the campus of Washington & Lee University in Lexington, Virginia.

The fictional character of Colonel Harry Burwell in the film The Patriot is thought{bywhom|date=January 2014} to have been inspired by the historical exploits of Lee.

In the musical 1776 Lee’s nickname is mentioned (anachronistically) during the song “The Lees of Old Virginia”.

* Lee, Henry, and Robert E. Lee. Memoirs of the War in the Southern Department of the United States. Eyewitness accounts of the American Revolution. [New York]: New York Times, 1969. (originally published 1812; 3rd ed. published in 1869, with memoir by his son Robert E. Lee)