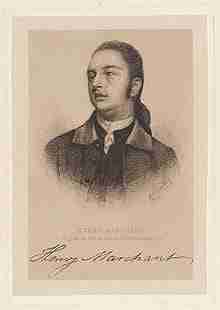 Henry Marchant (April 9, 1741 – August 30, 1796) was American lawyer from Newport, Rhode Island and United States federal judge. He was a delegate to the Continental Congress from 1777 to 1779, and was a signer of the Articles of Confederation for Rhode Island.

On July 2, 1790, Marchant was nominated by President George Washington to be the first judge of the newly created United States District Court for the District of Rhode Island. Marchant was confirmed by the United States Senate on July 3, 1790, and received his commission the same day, serving until his death in 1796.

He was a member of Second Congregational Church of Newport. His farm, the Henry Marchant Farm, is located in South Kingstown, Rhode Island.

Marchant died in Newport, Rhode Island and is buried in the Common Burial Ground.