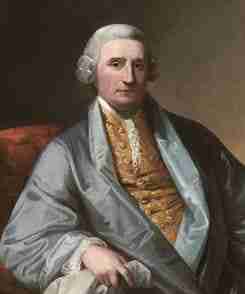 Henry Middleton (1717 – June 13, 1784) was a plantation owner and public official from South Carolina. A member of the colonial legislature, during the American Revolution he attended the Continental Congress and served as that body’s presiding officer for a few days in 1774. He left Congress before it declared independence. Back in South Carolina, he served as president of the provincial congress and senator in the newly created state government. After his capture by the British in 1780, he accepted defeat and returned to the status of a British subject until the end of the war.

Middleton married Mary Williams in 1741, with whom he would have five sons and seven daughters. After Mary’s death in 1761, Middleton would go on to marry twice more, second to Maria Henrietta Bull (in 1762) and third to Lady Mary McKenzie (in 1776).

Middleton served in a variety of public offices in South Carolina. He was a justice of the peace and a member of the Commons House of Assembly, where he was elected speaker in 1747, 1754, and 1755. He was a member of provincial council, but resigned in 1770 in opposition to British policy.

After Middleton’s return to South Carolina, he was elected president of the provincial congress and, beginning on November 16, 1775, served on the council of safety. In 1776, he and his son Arthur helped frame a temporary state constitution. In 1779, he became a state senator in the new government.

When Charleston was captured by the British in 1780, Middleton accepted defeat and status as a British subject. This reversal apparently did not damage his reputation in the long run, due to his previous support of the Revolution, and he did not suffer the fate of having his estates confiscated, as many Loyalists did after the war.

His grandson, also named Henry (1770–1846), had a long career in politics. He was Governor of South Carolina (1810–1812), U.S. Representative (1815–1819), and the minister to Russia (1820–1830). Some of Middleton’s children married into prominent families. Daughter Henrietta married Governor Edward Rutledge, Sarah was the first wife of Charles Cotesworth Pinckney, and his daughter Susannah married John Parker.