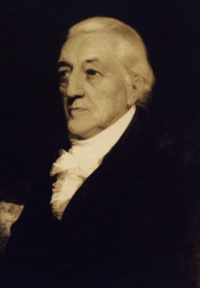 Born in New York City, in the Province of New York, Henry Rutgers was the son of New Netherland colonists Hendrick Rutgers and Catharine DePeyster. He graduated from King’s College (now Columbia University) in 1766 and promptly became an advocate for independence of the American colonies from Great Britain. He went on to serve as a captain of American forces at the Battle of White Plains, and later as a colonel for the New York militia. His home served as a barracks during the British occupation of New York in 1776. Colonel Rutgers would continue to play a role in the defense of the young nation after the Revolution, presiding over a meeting held June 24, 1812 to organize American forces in New York in anticipation of a British attack in the ensuing War of 1812.

In his later years, Rutgers, a bachelor, devoted much of his fortune to philanthropy. As a landowner with considerable holdings on the island of Manhattan (especially in the vicinity of Chatham Square), he donated land for the use of schools, churches, and charities in the area. Both Henry Street and Rutgers Street in lower Manhattan are named for him, as well as the Rutgers Presbyterian Church (formerly the Collegiate Presbyterian Church) which was also named for Colonel Rutgers who donated the parcel of land at the corner of Henry Street and Rutgers Street on which the original church was built in 1798.

Colonel Rutgers’ most lasting legacy however, is due to his donations to Queen’s College in New Brunswick, New Jersey, which at the time was suffering considerable financial difficulties and temporarily closed. The college had been founded as a seminary for the Reformed Church in America and appealed to Colonel Rutgers, a devout member of the church with a reputation for philanthropy, for aid. Rutgers donated a bond valued at $5000 to reopen the faltering school, and subsequently donated a bronze bell that was hung in the cupola of the Old Queens building which housed the college. In gratitude, and hoping the college would be remembered in the Colonel’s will, the trustees renamed it Rutgers College on December 5, 1825. (Colonel Rutgers left nothing to the college upon his death.) The institution later became “Rutgers University,” then “Rutgers, The State University of New Jersey”.

Henry Rutgers died in New York City, at the age of 84. Rutgers was originally buried at the Old Middle Church Cemetery on the corner of Nassau Street and Cedar Street in Manhattan. However, as cemeteries in Manhattan were redeveloped during the 1830s and ’40s, the Colonel’s body was re-interred several times. For many years, no one knew where his body was finally laid to rest, although it was long believed that he was buried in a Dutch Reformed churchyard in Belleville, New Jersey. One road running alongside this graveyard is now called Rutgers Street (signed as, but not technically part of, Route 7).

Misplaced by history for over 140 years, Henry Rutgers’ final “final resting place” is thought to have been rediscovered in October 2007 by Civil War research volunteers sifting through burial records of the historical Green-Wood Cemetery. In 1865, Rutgers’ body had been finally laid to rest in an unmarked grave within the Dutch Reformed Church’s plot at Green-Wood Cemetery in Brooklyn.

The Green-Wood Historic Fund and members of the Rutgers Community honored the Colonel’s memory on Flag Day, June 14, 2008 by unveiling a bronze marker at his gravesite. Elsewhere in Green-Wood Cemetery lies the grave Mabel Smith Douglass, founder and first dean of the New Jersey College for Women (renamed Douglass College in her honor), the former women’s college associated with Rutgers University.