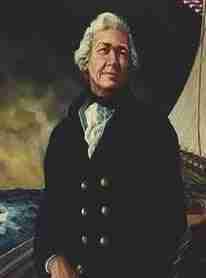 Yeaton was a veteran of the Continental Navy and the commanding officer of the Revenue Marine cutter Scammel. Yeaton probably brought along his slave, Senegal, during the Scammel’s patrols as was this practice was permitted by the Treasury Department at this time. Yeaton fired three of his crew after their first few months of service. The men had been in “open rebellion” over issues of pay and daily food rations—particularly after they learned that their fellow sailors on board the Massachusetts received more and varied foods each day than they did.

The tomb of the first commissioned officer of the Revenue Marine, Hopley Yeaton, now lies on the Academy’s grounds. He was originally buried in Lubec, Maine, but in 1975 his burial site was threatened by modernization. The Corps of Cadets sailed the barque Eagle to Lubec where his remains were exhumed and laid to rest at the Academy.

On August 2, 2008, in a bid to help affirm Grand Haven as “Coast Guard City USA,” the Walk of History was revealed to the public. The first point of history was the Hopley Yeaton Plaque, which was ceremonially unveiled by Vice Adm. Clifford Pearson and Andrew Yeaton, a direct descendant of Hopley Yeaton.