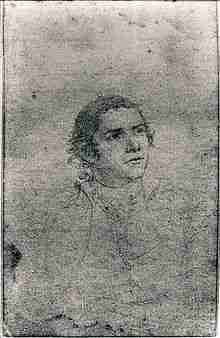 Mercer was born near Rosehearty, at the manse of Pitsligo Kirk, Aberdeenshire, Scotland, to Presbyterian Minister, Reverend William Mercer of Pitsligo Parish Church and Ann Monro. At 15, he attended the University of Aberdeen, Marischal College, studying medicine and graduated a Doctor. He was assistant surgeon in the army of Bonnie Prince Charlie in 1745, and was present at the Battle of Culloden when Charles’ Army was crushed on April 16, 1746, and any survivors were hunted down and killed. As a fugitive in his own homeland in 1747, Mercer fled Scotland after months in hiding. He bought his way onto a ship and moved to America, settling near what is now Mercersburg, Pennsylvania, and practiced medicine for eight years.

In 1755, when General Edward Braddock’s army was cut down by the French and Indians during the first British attempt to take Fort Duquesne, Mercer was shocked by the same butchery he remembered at Culloden. He came to the aid of the wounded and eventually took up arms in support of the army that a few years back was hunting him, this time as a soldier, not a surgeon. By 1756 he was commissioned a captain in a Pennsylvania regiment, and accompanied Lt. Col. John Armstrong’s expedition on the raid of the Indian village of Kittanning in September 1756. During the attack, Mercer was badly wounded and separated from his unit. He trekked 100 miles through the woods for fourteen days, injured and with no supplies, until he found his way back to Fort Shirley, where he was recognized and promoted. He rose to the rank of colonel and commanded garrisons. It was during this period that Mercer developed a lifelong and warm friendship with another colonel, George Washington.

Both Washington and Mercer served under British General John Forbes during the second attempt to capture Fort Duquesne. Forbes occupied the burned fort on November 25, 1758. Forbers immediately ordered the construction of a new fortification to be named Fort Pitt, after British Secretary of State William Pitt the Elder. He also named the settlement between the rivers “Pittsborough,” which is the location of modern Pittsburgh, Pennsylvania.

Forbes’s health, which had been poor for much of the campaign, began a rapid decline during his occupation of Fort Pitt. On December 3, 1758, now gravely ill, Forbes began the arduous journey back to Philadelphia leaving Colonel Hugh Mercer in command of Fort Pitt. General Forbes died in Philadelphia on March 11, 1759. He was buried in Christ Church in Philadelphia.

Mercer’s first task was to construct a temporary Fort to hold the Forks of the Ohio in case the French were able to execute their plans to return in the Spring of 1759. Drawing of the time call this temporary fortification “Mercer’s Fort”. Mercer’s Fort stood at the site of what is today a parking lot between Point State Park and the Pittsburgh Post Gazette Building.

After befriending several Virginia men, Mercer moved to Fredericksburg, Virginia in 1760 to begin his medical practice anew at the conclusion of the war. When Mercer arrived in Fredericksburg, it was a thriving Scottish community that must have been a happy sanctuary for a Scotsman who could never again see his homeland. He became a noted member and businessman in town, buying land and involving himself in local trade. He became a member of the Fredericksburg Masonic Lodge in 1767, and sat as its Master a few years later. (Two members of this same lodge, Washington and James Monroe, would later become American Presidents, and at least eight members were generals of the American Revolution (Washington, Mercer, George Weedon, William Woodford, Fielding Lewis, Thomas Posey, Gustavus Wallace, and the Marquis de Lafayette (honorary in 1824) – far more than any other group, institution or organization save the pre-Revolution British Army. This lodge is still in existence today.)

Soon after this, Mercer opened a physician’s apothecary and practice. His apothecary in Fredericksburg, Virginia is now a museum. George Washington’s mother, Mary Washington, became one of Mercer’s patients, and Mercer prospered as a respected doctor in the area. Mercer married Isabella Gordon and fathered five children: Ann Mercer Patton, John Mercer, William Mercer, George Weedon Mercer, and Hugh Tennant Mercer. In 1774, George Washington sold Ferry Farm, his childhood home, to Mercer, who wanted to make this prized land into a town where he and his family would settle for the remainder of his days.

During 1775, Mercer was a member of the Fredericksburg Committee of Safety, and on April 25 he was one of the members of the Independent Company of the Town of Fredericksburg who sent a letter of concern to then-Colonel George Washington when the British removed gunpowder from the magazine at Williamsburg. In an August vote, Mercer was excluded from the elected leadership of the new regiments formed by the Virginia Convention because he was a “northern Briton,” but on September 12 he was elected Colonel of the Minute Men of Spotsylvania, King George, Stafford, and Caroline Counties.

On November 17 Mercer was one of 21 members chosen for the Committee of Safety of Spotsylvania County. On January 11, 1776, Mercer was appointed Colonel to what soon became the 3rd Virginia Regiment of the Virginia Line, and the next day George Weedon was appointed Lieutenant Colonel. Future president James Monroe and future Chief Justice of the United States John Marshall also served as officers under his command. In June 1776 Mercer received a letter from the Continental Congress, signed by John Hancock, appointing him Brigadier-General in the Armies of the United Colonies and requesting him to report to headquarters in New York immediately. Mercer soon left Fredericksburg to join the Continental Army.

Before the New York City Campaign, Washington ordered two forts built to repel the Royal Navy. On the New York side of the Hudson River, Fort Washington was constructed, and Mercer himself oversaw the building of the earthen fortification on the New Jersey side, named Fort Lee. Though bravely defended, the British captured Fort Washington on November 16, 1776, and the Americans abandoned Fort Lee four days later. The retreat to New Jersey became known as “the Crisis of the Revolution”, because the enlistments of most of Washington’s beaten and down-trodden soldiers ended on New Year’s Day 1777.

There are rumors that Mercer exclusively originated Washington’s daring plan to cross the Delaware River and surprise the Hessians at the Battle of Trenton on December 26, 1776, and he was certainly a major contributor to its execution. Because of the win at Trenton (and a small monetary bonus), Washington’s men agreed to a ten-day extension to their enlistment. When Washington decided to face off with Cornwallis during the Second Battle of Trenton on January 2, 1777, Mercer was given a major role in the defense of the city.

The next day, January 3, Washington’s army was en route to Princeton, New Jersey. While leading a vanguard of 350 soldiers, Mercer’s brigade encountered two British regiments and a mounted unit. A fight broke out at an orchard grove and Mercer’s horse was shot from under him. Getting to his feet, he was quickly surrounded by British troops who mistook him for George Washington and ordered him to surrender. Outnumbered, he drew his saber and began an unequal contest. He was finally beaten to the ground, then bayoneted repeatedly – seven times – and left for dead.

When he learned of the British attack and saw some of Mercer’s men in retreat, Washington himself entered the fray. Washington rallied Mercer’s men and pushed back the British regiments, but Mercer had been left on the field to die with multiple bayonet wounds to his body and blows to his head. (Legend has it that a beaten Mercer, with a bayonet still impaled in him, did not want to leave his men and the battle and was given a place to rest on a white oak tree’s trunk, while those who remained with him stood their ground. The tree became known as “the Mercer Oak” and is the key element of the seal of Mercer County, New Jersey.)

When he was discovered, Mercer was carried to the field hospital in the Thomas Clarke House (now a museum) at the eastern end of the battlefield. In spite of medical efforts by Benjamin Rush, Mercer was mortally wounded and died nine agonizing days later on January 12, 1777.

Because of Mercer’s courage and sacrifice, Washington was able to proceed into Princeton and defeat the British forces there. He then moved and quartered his forces to Morristown in victory. Because of those victories, Washington’s army reenlisted, the French finally approved arms and supplies to the Americans and a stunned Cornwallis pulled his forces back to New York to reassess the surprising American successes. The “crisis” had ended, America had the means to fight, and British public support for the war slowly began to wane. A portrait by Charles Willson Peale entitled Washington at the Battle of Princeton, January 3, 1777 displays Washington in the foreground with Hugh Mercer lying mortally wounded in the background, supported by Dr. Benjamin Rush and Major George Lewis holding the American flag. This portrait is the prize possession of Princeton University. Ironically James Peale painted a version of “Battle of Princeton” which shows in the background a very indistinct portrait of Mercer being helped from the ground. Reportedly the Trumbull sketch of Mercer {above} was based on a son of General Mercer.

In the 2000 television film The Crossing, a dramatization of Washington’s crossing of the Delaware and the battle of Trenton, Mercer is played by Roger Rees.