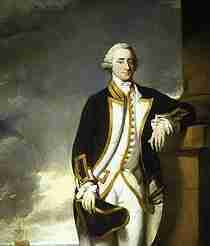 Admiral Sir Hugh Palliser, 1st Baronet (26 February 1723{Ref_label|A|a|none} – 19 March 1796) was an officer of the British Royal Navy during the Seven Years’ War and the American Revolutionary War. During the latter he came into a famous dispute with Augustus Keppel over the Battle of Ushant which led to Palliser being court-martialled, although he was subsequently acquitted.

Palliser was the only son of Hugh Palliser and Mary Robinson. at Kirk Deighton, in the North Riding of Yorkshire. The family had estates in Yorkshire and Ireland. His parents died when he was still young, so he and his sisters were (probably) raised by relatives on his mother’s side. He entered the navy in 1735 as a midshipman on HMS Aldborough commanded by his uncle Nicholas Robinson. He followed his uncle to HMS Kennington in 1737, and then to HMS Tiger and HMS Essex.

Palliser passed his lieutenant’s examination on 12 May 1741 and was promoted to the rank on 18 September 1741. He continued to serve aboard Essex, at first under Robinson, and after he was superseded, under Captain Richard Norris, the son of Sir John Norris. On 3 July 1746 he was placed in command of HMS Weazel. On 25 November of that year he was appointed post-captain of HMS Captain, sailing for the West Indies with the broad pennant of Commodore Edward Legge. Legge died on 19 September 1747, and Palliser transferred to HMS Sutherland. Six months later an accidental fire in that ship’s arms chest wounded Palliser; a ball entered his back and exited his groin; another ball struck his right hip; a third ball struck his left shoulder. Two men were killed in the explosion, and Palliser returned to England to recover. He recovered, though he remained lame in his left leg, and suffered perpetual and sometimes excruciating pain, to which his death was eventually attributed. He was appointed to the frigate HMS Sheerness in December 1748, and sailed her to the East Indies to bring the commanders there news of the peace. He was part of Edward Boscawen’s squadron on the Coromandel coast from July 1749, returning to Britain to pay off Sheerness in April 1750. Palliser was next appointed to {HMS|Yarmouth|1745|6}, the guardship at Chatham. Shortly afterwards he was moved to the 20-gun {HMS|Seahorse|1748|6}, and while in that command he was arrested by Scottish authorities for refusing to let one of his seamen be taken from the ship on what turned out to be a forged letter of indenture. Palliser was held for several days in the Tolbooth Jail in Edinburgh until released by the Lords of Sessions, who invoked their authority to supersede that of the judge of the vice-admiralty court in Edinburgh.

In early 1753 Palliser was appointed captain of the 50-gun {HMS|Bristol|1711|6}, but soon afterwards was returned to a convoy consisting of Seahorse and {HMS|Nightingale|1746|2}, to protect transports being used to move two British Army regiments to the Colonies to be used against the French forces there. He sailed in January 1755, but chose to sail far south of the usual route. Going as far south as the Tropic of Cancer, he avoided the usual stormy and rough crossing, which won him significant notoriety and praise from governmental authorities.

The ongoing friction between Britain and France ignited into open warfare in 1755. In October of that year Palliser was placed in command of the 60-gun HMS Eagle. That ship engaged and defeated the French 50-gun Duc d’Aquitain off Ushant on 30 May 1757. After that battle Eagle returned to port for repairs, and Palliser moved to command of the 74-gun HMS Shrewsbury, part of the Channel Fleet under George Anson.

In that ship in July 1758 he grounded and captured several French ships near Brest. In 1759 Palliser participated in the successful British capture of Quebec City, commanding the seamen who landed and took possession of Lower Town. In 1760 Palliser was sent to the Mediterranean Sea to chase a small French squadron which had slipped out of the port at Toulon. He bottled the French boats up at several ports in Turkey. In 1762 Palliser commanded a four-ship armada dispatched to retake St. Johns, Newfoundland, but the area was already in British control when he arrived following the Battle of Signal Hill.

==Governor of Newfoundland and subsequent service==

In 1764 Palliser was named Governor and Commander-in-Chief at Newfoundland. He had under his command the 50-gun {HMS|Guernsey|1696|6}, and several frigates. His forces encountered a similar French force which was ostensibly regulating their remaining fishing grounds in the area, but Palliser perceived that they had altered their maps to show they controlled more area than had been agreed upon in the negotiations which ended the conflict in this area. The French minister in London used this clash to complain to the British government against Palliser, but he was able to produce sufficient maps and supporting material to convince his superiors of his correct actions.

Palliser actively supported the fisheries as a source of trained seamen for the Royal Navy. As such he took active steps to enforce the provisions of Treaty of Paris (1763) restricting French access to their specific fishing rights. He also sought to restrict further settlement of Newfoundland, so to encourage the British based industry.

Palliser remained Governor of Newfoundland until 1768. In 1770 Commodore Palliser was appointed Comptroller of the Navy, and in that same year was elected an elder brother of the Trinity House, which oversees British lighthouses and provides general expertise to the government on naval matters.

In 1773 Palliser was made Baronet. In 1774 he was elected to Parliament for the Borough of Scarborough. In 1775 he achieved flag rank when promoted to rear-admiral. Under the Earl of Sandwich he became one of the Lords of the Admiralty and received the sinecure of Lieutenant-General of Marines. In 1775 he initiated legislation to encourage ship fisheries, known as Palliser’s Act but titled “The Act for the Encouragement of the Ship Fishery”.

Historian Sean Cadigan, author of Hope and Deception in Conception Bay (1995), has since linked Palliser’s Act with the high-valuation of women’s labour in 18th Century Newfoundland. Given that Palliser’s Act required producers to pre-pay their labourers for the fishing season, producers developed little incentive to hire outside of their families: hired labour was high risk because pre-paid wages reduced producers’ margin for gain (or loss). As such, Palliser’s Act inspired the merger of household labour with the market, making women’s work essential to the economic success of the colony.

In 1778 Palliser was promoted again to Vice-Admiral of the Blue.

In 1778 Palliser was appointed to the Channel Fleet under Admiral Augustus Keppel. On 27 July 1778 in the First Battle of Ushant, the Channel Fleet fought an inconclusive battle with the French fleet. The battle’s outcome led to personal acrimony between Palliser and Keppel, resulted in their individual courts martial and increased divisiveness in the Navy. Palliser was forced to resign from Parliament and his other posts.

The July 1778 Battle of Ushant came about when the British fleet found that it had become located between the French ships and their home ports. Seeing the sudden advantage, Keppel ordered that a battle line be formed and an attack made. Palliser’s ship {HMS|Formidable|1777|6} was badly damaged in the ensuing fray, and when Keppel hoisted the signal to reform the battle line, Palliser’s division was some distance away, so a frigate was dispatched to give the instruction. Due to the battle damage, Palliser’s division was unable to comply until later in the evening, when it was too late to continue the battle, and the French withdrew to Brest. Both sides later claimed victory, and Keppel issued a dispatch which commended all his officers for their conduct in the action.

Palliser heard rumours that Keppel had intimated in private conversations that Palliser’s absence had been the cause of the inconclusive outcome, so Palliser wrote a paper defending his actions. An anonymous letter to a London newspaper accused Palliser of disobedience in the battle, and he called on Keppel to refute the allegation. When no public refutation was forthcoming, Palliser demanded that a court martial be held to try Keppel on charges of “misconduct and neglect of duty” (which carried a death sentence if proved). Keppel’s court martial was held at Portsmouth in January 1779, and he was acquitted after 27 days, the court finding that the charges against him had been brought with malicious intent and were unfounded. The court-martial outcome meant ruin for Palliser. He was defended by Lord Sandwich, but still had to resign from Parliament and as Lieutenant-General of the Marines. He then demanded that a court martial be convened against him so that he could present his version of events during his defence. The court martial was convened, and he was acquitted after 21 days. However, he was censured in that he had failed to inform his superior officer of the battle damage in a timely manner.

After his acquittal Palliser hoped to be reinstated in Lt.-General of Marines. Instead, in 1780 he was appointed Governor of Greenwich Hospital by Lord Sandwich, and was again elected to Parliament for Huntingdon (1780–1784). In 1787 he was promoted to the rank of Admiral.

James Cook, a fellow Yorkshireman, first served under Palliser as Master’s Mate of HMS Eagle from 1755 to 1758. Palliser would have supported his elevation to Master in 1757. Both were present at the siege of Quebec where Cook charted the approach to the city and the landing area. Following the Treaty of Paris, Cook was charged with surveying Newfoundland. As Governor, Palliser actively supported Cook’s work and assisted in the publication of his acclaimed map of Newfoundland. During his term as Comptroller, Palliser supported Cook’s first command of exploration in 1768, and his subsequent voyages. Cook named Cape Palliser, Palliser Bay and Palliser Isles after his “worthy friend”. On Cook’s death, Palliser erected a memorial to Cook on his estate (The Vache).

Admiral Palliser died on 19 March 1796 in at his estate in Chalfont St Giles and was buried at St Giles.