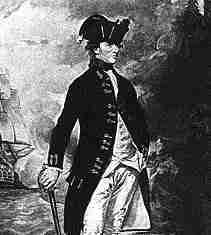 From 1766 onwards for many years he served in the West Indies and in North American waters, particularly distinguishing himself in breaking the defences of the North River at New York in 1776. His services on this occasion earned him a knighthood in 1779. In 1778 he was engaged in the Savannah expedition, and in the following year his ship was wrecked on the hostile Cuban coast. His men, however, entrenched themselves, and were in the end brought off safely. Parker was with his father at the Battle of Dogger Bank, and with Richard Howe in the two actions in the Straits of Gibraltar. He reached flag rank on 1 February 1793, the same day that war was declared against the new French Republic. As Rear Admiral, he served under Samuel Hood at Toulon and in Corsica. He was promoted to Vice-Admiral on 4 July 1794 and took part, under The Lord Hotham, in the indecisive fleet actions on 13 March 1795 and 13 July 1795. From 1796 to 1800 he was in command at Jamaica and ably conducted the operations in the West Indies.{sfn|Chisholm|1911|p=827}

He became a full Admiral on 14 February 1799.{citation needed|date=May 2013} In 1801 he was appointed to command the fleet destined to break up the northern armed neutrality, with Vice-Admiral Horatio Nelson as his second-in-command. Copenhagen, the first objective of the expedition, fell in the Battle of Copenhagen on 2 April 1801 to the fierce attack of Nelson’s squadron – Parker, with the heavier ships, taking little part{sfn|Chisholm|1911|p=827} due to the shallowness of the channel. At the height of the battle Parker, who was loath to infringe the customary rules of naval warfare, raised the flag to disengage. Famously, Nelson ignored the order from his commander by raising his telescope to his blind eye and exclaiming “I really do not see the signal”(although this is generally accepted to be a myth). Nelson pressed on with the action and ultimately compelled the Danish forces to capitulate.{sfn|NT staff|2013|p=1} Parker’s hesitation to advance up the Baltic Sea after his victory was later severely criticised. Soon afterwards he was recalled and Nelson succeeded him.{sfn|Chisholm|1911|p=827} He died on 16 March 1807.{sfn|Rines|1920}

In Parker’s entry in the Oxford Dictionary of National Biography his biographer Clive Wilkinson writes that until the Copenhagen affair he had “a good professional reputation” but after Copenhagen he was “considered irresolute and dilatory. In Wilson’s opinion “As an officer, Parker was an able administrator rather than a great leader and this was to prove a weakness when it came to having both St Vincent as his chief and Nelson as a subordinate”; and that “He was evidently a popular man for as Nelson wrote after Copenhagen:”{sfn|Wilkinson|2008}

Parker was twice married: first, to Anne, daughter of John Palmer Boteler, and by her and three sons;{sfn|Laughton|1895|p=245} an secondly in 1800 he married Frances,{citation needed|reason=for the year and the name Frances|date=May 2013} a daughter of Admiral Sir Sir Richard Onslow,{sfn|Laughton|1895|p=245} and made their home at the manor house in Benhall on the Suffolk coast.{sfn|Wilkinson|2008}

Two other notable family members who fought in the Napoleonic wars are Parker’s second brother, John Boteler, died a major-general and C.B. in 1851; and the youngest, Harry, a lieutenant in the guards, fell at the Battle of Talavera.