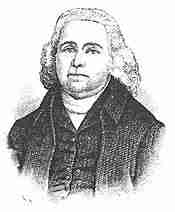 Isaac Backus (January 9, 1724{spaced ndash}November 20, 1806) was a leading Baptist preacher during the era of the American Revolution who campaigned against state-established churches in New England.

Born in the village of Yantic, now part of the town of Norwich, Connecticut, Backus was influenced by the Great Awakening and the works of Jonathan Edwards and George Whitefield. He was converted in 1741. For five years, he was a member of a Separatist Congregationalist church. In 1746, he became a preacher. He was ordained in 1748. Backus became a Baptist in 1751 when he became pastor of the Middleborough Baptist Church in Middleborough, Massachusetts.

In 1764, Isaac Backus joined John Brown, Nicholas Brown, William Ellery, Stephen Hopkins, the Reverend James Manning, the Reverend Ezra Stiles, the Reverend Samuel Stillman, the Reverend Morgan Edwards and several others as an original fellow or trustee for the chartering of the College in the English Colony of Rhode Island and Providence Plantations (the original name for Brown University), the first Baptist school of higher learning.

Considered a leading orator of the “pulpit of the American Revolution”, Backus published a sermon in 1773 that articulated his desire for religious liberty and a separation of church and state. Called An Appeal to the Public for Religious Liberty, Against the Oppressions of the Present Day, in it Backus stated: “Now who can hear Christ declare, that his kingdom is, not of this world, and yet believe that this blending of church and state together can be pleasing to him?”

In 1778, he authored a historically important work entitled Government and Liberty Described and Ecclesiastical Tyranny Exposed of which a copy is held by the John Carter Brown Library at Brown.

Backus served as a delegate from Middleborough to the Massachusetts ratifying convention, which ratified the United States Constitution in 1788. He voted in favor of ratification.