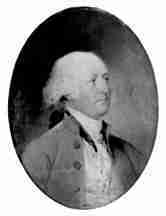 Read was born at “Hobcaw” plantation in Christ Church Parish, near Charleston, South Carolina, in 1752. After he completed preparatory studies, he studied law and was admitted to the bar. He also studied in England from 1773 to 1776. He joined other Americans in London in 1774 in a petition against the Boston port bill.

When Read returned to the United States, he served South Carolina in various military and civil capacities during the Revolutionary War. He was sent with other Americans as a prisoner of the British to St. Augustine from 1780 to 1781. He was a member of the State assembly in 1782, and of the privy council in 1783. He served as a Member of the Continental Congress from 1783 to 1785, and was a member of the South Carolina house of representatives serving as speaker.

Elected as a Federalist to the United States Senate,Read served from March 4, 1795, to March 3, 1801. He served as President pro tempore of the Senate during the Fifth Congress, but was an unsuccessful candidate for reelection.

Read died in Charleston, South Carolina, on July 17, 1816 (age about 64 years). He is interred in the Bond/Read family cemetery at “Hobcaw,” in Christ Church Parish, near Charleston.