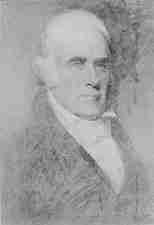 James DeWolf (March 18, 1764{spaced ndash}December 21, 1837), nicknamed “Captain Jim,” was a United States Senator from Rhode Island, a long-time state legislator and a successful privateer during the war of 1812.

Born in Bristol, Rhode Island to a shipping family, DeWolf shipped as a sailor on a private armed vessel during the American Revolutionary War. He participated in several naval encounters and was captured twice by the British. He became captain of a ship before he was 20 and engaged in commercial ventures, including trading in slaves, with Cuba and other West Indian islands. In 1790, he married Nancy Ann Bradford, the daughter of William Bradford, who would become U.S. Senator of Rhode Island before him. In 1791, DeWolf was indicted for murder by a Newport, Rhode Island grand jury. He was alleged to have had a female slave sick with typhoid fever thrown overboard while gagged and tied to a chair, this after almost his entire crew refused to participate in the murder. DeWolf heard the indictment and immediately left for the Gold Coast of Africa. Two members of the crew, one of whom had participated in the killing, stated in a 1794 deposition taken in St. Eustatius, Leeward Islands that the action was necessary in order to save those on board from the disease. DeWolf testified in St. Thomas, West Indies in 1795 with no one present to oppose his testimony, and the judge ruled in his favor. The case was dismissed, upon petition from the district attorney, as being without merit. DeWolf went on to finance another 25 slaving voyages, usually with other members of his family. His business empire included three sugar plantations in Cuba.

During the War of 1812, DeWolf fitted out privateers under the authority of the President of the United States. One of his ships, the Yankee, became the most successful privateer of the war. DeWolf was a member of the Rhode Island House of Representatives from 1797–1801, again from 1803–1812, 1817–1821, and 1829-1837. He served as speaker of the House from 1819 to 1821. He was a pioneer in cotton manufacturing and built the Arkwright Mills in Coventry, Rhode Island in 1812. DeWolf became the wealthiest man in the state, if not the region, and by the end of his life was said to be the second richest person in the United States.

DeWolf was elected as a Democratic-Republican (later Crawford Republican) to the U.S. Senate and served from March 4, 1821, to October 31, 1825, when he resigned.

He died in New York City in 1837 at the age of 73, and was buried in the DeWolf private cemetery, Woodlawn Avenue, Bristol.

DeWolf was featured prominently in a 2008 documentary, Traces of the Trade: A Story from the Deep North, which described the DeWolf family’s role in the slave trade.