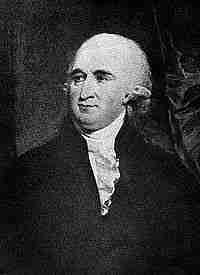 James Duane (February 6, 1733 – February 1, 1797) was an American lawyer, jurist, and Revolutionary leader from New York. He served as a delegate to the Continental Congress, a New York state senator, 44th Mayor of New York City, and a U.S. District Judge, and was a signer of the Articles of Confederation.

James was a natural born American son of an Anglo-Irish colonial settler. His father, Anthony Duane (c. 1679 – 1747), was a Protestant Irishman from County Galway in Ireland and first came to New York as an officer of the Royal Navy in 1698. Like others of colonial background, Anthony considered himself merely settling from one part of the British Empire to another as a free subject. Consequently, he maintained strong allegiance to the crown throughout his life, values which he later passed onto to his son. He met and courted Eva Benson, whose father, Dirck, was a local American merchant. In 1702 Anthony left the navy, settled in New York, and married Eva. They had two sons before her death. When Eva died, Anthony remarried, this time to Althea Ketaltas (Hettletas), the daughter of a wealthy Dutch merchant family. Anthony entered commerce and prospered, and the couple had a son, James.

James’s mother, Althea, died in 1736, and his father married a third time in 1741 to Margaret Riken (Rycken), the widow of Thomas Lynch of Flushing, New York. When Anthony Duane died in 1747, the young James became the ward of the prominent American aristocrat Robert Livingston, who was known as the 3rd Lord of the Manor. He completed his early education at Livingston Manor, then read law in the offices of James Alexander. He was admitted to the bar in 1754. Then on October 21, 1759, James married Mary Livingston, the eldest daughter of his former guardian Robert. He was Clerk of the Chancery Court of New York in 1762, provincial Attorney General in 1767 and Indian commissioner for the Province of New York in 1774.

Duane was a member of the Committee of Sixty that began the revolution in New York. He was made a delegate to the Continental Congress in 1774, and was continuously re-appointed through 1784, although he missed some sessions due to other duties. Duane, like many other Americans, had inherited their forefather’s patriotism to the British crown as well as their instinctive jealousy for their own rights as Englishmen. Consequently, James wrestled with his ancient allegiance to the British Empire and his desire to maintain and protect his ideals of English liberty and American self-government from what was perceived as encroachments upon their rights by an increasingly centralized imperial state. Thus, in the early Congress, he was one of the many who were most disposed to reconciliation with Britain. He supported the Galloway Plan, and opposed the Declaration of Independence. However, as the British government sent the largest combined navy and army force yet seen in history in a bid to destroy the rebellion, Duane quickly saw the futility of any further concord with the British government and advocated independence.

Nonetheless, because of his vacillation in contrast to more ardent independence-minded delegates, as well as his noted familial loyalty to New York, it was considered a better use of his talents working on the frontier against British agitation amongst the Indian tribes. Thus, in 1775 he represented Congress as an Indian commissioner at Albany, New York. However, his local constituency later returned him to the new state constitutional convention from 1776-1777. Due to his excellent legal and political philosophical background, he served on the committee that drafted New York’s constitution. Subsequently he was elected as a delegate by the State of New York to the Continental Congress. When the British occupied New York in 1776, he was forced from his home. With the British Army forces quick on his tail and those of other American leaders, he withdrew his wife and family to the relative safety of her father’s home at Livingston Manor. In 1778 he signed the Articles of Confederation in Philadelphia. He remained active as a political leader throughout the war, and returned home to Gramercy Park in 1783.

Duane served in the New York state Senate from 1783 to 1790. He became the Mayor of New York by appointment in 1784, serving until 1789. He was a delegate to the New York convention that ratified the Federal Constitution.

On September 25, 1789, President Washington named him the first judge of the United States District Court for the District of New York, created by 1 Stat. 73. He was immediately confirmed by the United States Senate, and received his commission the following day. Richard Varick followed him as mayor.

Duane served on the Federal bench until March 17, 1794, when his health forced him to resign. Throughout his life, he had worked to establish his own estate, inherited from his father, and centered at Duanesburg, New York. He had started erecting a home there for himself, but did not live to see it completed. He died at Schenectady, New York, and is buried at Christ Episcopal Church in Duanesburg.

It is believed that Duane Street in Manhattan was named in his honor. (The Duane Reade pharmacy chain is named after the street.)